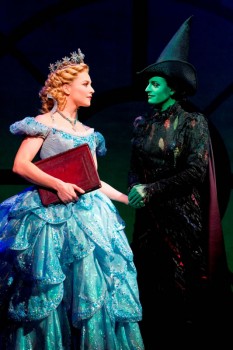 Fort Lauderdale – After breaking box office records and selling out in record time at Broward Center for the Performing Arts in 2008 WICKED, Broadwayâ€™s biggest blockbuster, will return to Ft. Lauderdale this Spring for a limited 4-week engagement. Tickets for the return engagement go on sale Sunday, December 12 at 10:00a.m

With music and lyrics by Stephen Schwartz (Godspell, Pippin, Academy Award-winner for Pocahontas and The Prince of Egypt) and book by Winnie Holzman (â€œMy So Called Life,â€ â€œOnce And Againâ€ and â€œthirtysomethingâ€), WICKED, the untold story of the witches of Oz, is directed by two-time Tony Award winner Joe Mantello (Take Me Out, Love! Valour! Compassion!, The Vagina Monologues) and features musical staging by TonyÂ® Award winner Wayne Cilento (Aida, The Whoâ€™s Tommy, How To Succeedâ€¦).

Based on the best-selling 1995 novel by Gregory Maguire, WICKED, winner of 35 major awards, including a GrammyÂ® and three TonyÂ® Awards, is the untold story of the witches of Oz. It is produced by Marc Platt, Universal Pictures, The Araca Group, Jon B. Platt and David Stone.

â€œBroward Center for the Performing Arts was home to the South Florida debut of the acclaimed Broadway musical, Wicked, and we are thrilled to see it return to the Au Rene stage in our 20th anniversary celebration season,â€ said Kelley Shanley, President/CEO, Broward Center for the Performing Arts. â€œThis show has certainly had a significant impact on theater audiences worldwide, and South Florida has been no exception. Its broad appeal to audiences of all ages and the universal theme of self-discovery make it a memorable musical experience for all who attend. We know many theater-goers return to Wicked time and time again, and we look forward to welcoming them here in Spring 2011.â€ Long before Dorothy drops in, two other girls meet in the Land of Oz. One â€“ born with emerald-green skin â€“ is smart, fiery and misunderstood. The other is beautiful, ambitious and very popular. WICKED tells the story of their remarkable odyssey, and how these two unlikely friends grow to become the Wicked Witch of the West and Glinda the Good.

*As a note to all calendar listing editors, the title of the show is WICKED (not WICKED: A New Musical or WICKED, the untold story of the witches of Oz).