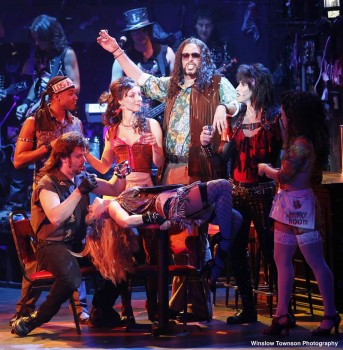 Coming direct from Broadway, Maroulis, who Rolling Stone declared â€œa perfect lead,â€ will reprise his acclaimed performance in the First National Tour of the five-time Tony AwardÂ® nominated smash-hit musical. Set in 1987 on Hollywoodâ€™s Sunset Strip where a small town girl meets a big city dreamer at L.A.â€™s most legendary rock club, they fall in love to the greatest songs of the â€œ80s, including such iconic feel-good, sing-out loud songs as Every Rose Has its Thorn, I Wanna Know What Love Is, Here I Go Again, and Donâ€™t Stop Believinâ€™.

ROCK OF AGES opened on April 7, 2009 at Broadwayâ€™s Brooks Atkinson Theatre to critical acclaim, following an off Broadway engagement in the fall of 2008. The Broadway production was nominated for Five 2009 Tony AwardsÂ®, including Best Musical, and New Line Records released the Original Broadway Cast Recording in July 2009, featuring 28 songs from the show. A New Line Cinema/Warner Bros. film of the musical, directed by Adam Shankman (Hairspray), is scheduled to be released in 2011.

ROCK OF AGES opened to rave reviews at the legendary Royal Alexandra Theatre in Toronto, Canada on May 11, 2010. It was also recently announced that ROCK OF AGES will head down under and open at the Comedy Theatre, Melbourne, Australia in April 2011.

FOR MORE INFORMATION ON ROCK OF AGES: www.RockofAgesMusical.com

BRET TUOMI (Hertz) Notable credits include Fezziwig in A Christmas Carol with The Goodman Theatre, Macduff in Macbeth with Notre Dame Shakespeare Festival and Leo in Leading Ladies with Montana Repertory Theatre.

TRAVIS WALKER (Franz) is psyched to have his first tour be RoA! An actor out of Chicago, his most recent credits include Sweet and Hot: A Harold Arlen Revue and the Jeff Award-Winning production of Chess with Theo Ubique Cabaret. Heâ€™s also worked with AboutFace Theatre and Hubris Productions.

SEAN JENNESS (Ensemble, Male Booth Singer) — recent theatrical credits include the Southern Captain in The Civil War in Washington DC and Chucky/Adam in the Carnegie Hall production of Jerry Springer:The Opera. Regional: Almost Heaven (world premiere, Hair, American Duet. National tours: Hair (Woof) and Tommy (Pinball Lad). He has fronted some of the most popular (and wildly diverse) bands in the Northeast, including The Doug Flutie Band. www.theseanjenness.com