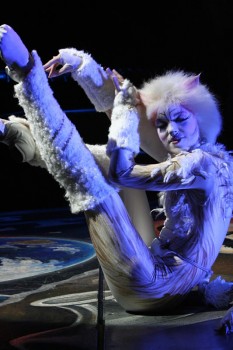 The Only Production In North America Purring Away Returns To Fort Lauderdale In Time For The Holidays – Opening A Limited 5 Performance Run, December 17- 19 Presented By Florida Theatrical Association At Broward Center For The Performing Arts
December 17 to 19, 2010

Produced by CATS-Eye, LLC, the national tour of CATS is the only production in North America sanctioned by Andrew Lloyd Webber. With original direction by Trevor Nunn and choreography by Gillian Lynne this is the CATS credited with the British invasion of Broadway. The national tour of CATS is closing in on its 30th anniversary, holding its place as the longest continuously touring Broadway musical in history.

On May 11, 1981, CATS opened at the New London Theatre in the West End. Eight years later it celebrated its first important milestone: after 3,358 performances CATS became the longest running musical in the history of British theatre. CATS played its final performance on its 21st birthday, May 11, 2002.

CATS opened on Broadway October 7, 1982 at the Winter Garden Theatre in New York City and continued to live up to its motto “Now and Forever.” On June 19, 1997, CATS became the longest running musical on Broadway. It ended its 18 year run on September 10, 2000 with 7,485 performances. That record was broken by The Phantom of the Opera on January 9, 2006 when Phantom celebrated its 7,486th curtain.

In October of 1991 CATS became the longest continuously touring show in American theatre history. Five continents, 26 countries, over eight and a half million audience members and almost 30 years later, CATS is still Americaâ€™s most loved family musical. Celebrating not only its Broadway touring legacy but the birth of the musical spectacular, CATS is still revolutionary and awe inspiring.

Now that it was been seen by millions of audience members worldwide, it is time to celebrate with the whole family the magic, the mystery, the wonder of CATS.