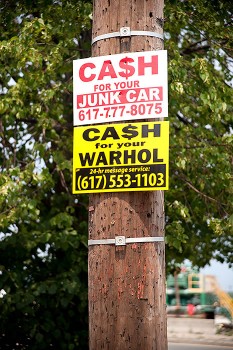 Geoff Hargadon on the project:
â€œCash For Your Warhol started out for me with the idea that it’s TOTALLY NUTS that anyone would actually call a random phone number on a street pole and try to sell them their house. But apparently people do that. It turns out people aren’t shy about selling their Warhols that way either – I have had a bunch of serious offers (the discussions have been lengthy and well-documented, but there are no trades yet)…
CFYW seems to strike a nerve with people who are tuned into the economy’s chaos, and with artists who are feeling the pinch in a contracting art market… Separately, it refers to a Warhol as a commodity rather than a piece of art – I don’t believe it is, but many do. It’s a good that is bought and sold. It raises the idea of what a Warhol is worth rather than what it is.â€