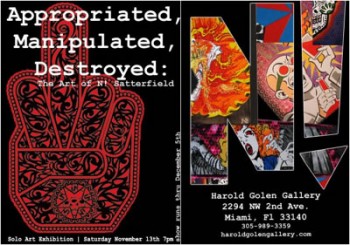 In his own words:
With that you’re probably wondering, “What the heck is N!?”, or possibly, “Who is this N! person?”.

You see, some folks believe I am a graffiti artist or a stencil artist because of the tools and techniques I employ, but graffiti is a pretty vague term and stencils are simply mark-making tools. Granted, I’ll admit to creating quite a bit of stencil graffiti in my time on the planet but that’s only a small part of the picture. Somewhere in the process I became more interested in using the tools of the trade (spray paint, caps, stencils, attitude) to make something more visually pleasing.”So it’s pop art?” Well, I do veil my subversive tendencies in the veneer of tiki imagery and thereby gain the ability to comment on it. And it’s certainly as pretty as it is confrontational, but it’s basically an exercise in culture jamming and as such is social commentary.