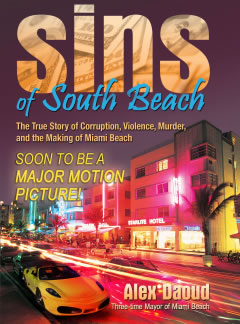 Miami Beach, FL /November 29, 2010 -Alex Daoud, three-time mayor of Miami Beach will sign copies of his controversial expose, “Sins of South Beach” at Florida’s largest, newly opened Walgreens at 501 Collins Avenue in Miami Beach on December 4th from 11-3 p.m. The event is free, open to the public, and will feature music and food.

“An astonishing exposÃ© on Miami Beach by one of the city’s most beloved mayors,” says New York Times best-selling author Steven Gaines. “The revelations are stunning-sex, corruption, police misconduct, villains and heroes.”

“Sins of South Beach” is Alex Daoud’s portrait of the city he led for three terms as mayor during the anything-goes ’80s – when “cocaine cowboys” slaughtered each other in bloody drug wars and refugees from the Mariel Boatlift, many released by Fidel Castro from his worst jails and insane asylums, terrorized the predominately elderly Jewish population of Miami Beach. It’s the story of a city’s renaissance and the crime and corruption, which fueled it. Daoud was a driving force behind the rebirth of the city.

“Sins of South Beach” has been acquired for cinematic release by Cinepro Pictures. The movie will be produced by internationally renowned filmmaker Philippe Martinez. His credits include over 30 films including Modigliani starring Andy Garcia. The world premier of the movie will be in South Beach.

“Sins of South Beach” is now available at the seven Walgreens conveniently located throughout Miami Beach. On December 4th the public will get to meet the charismatic former mayor turned author and purchase autographed copies of his book that will soon be a major motion picture.