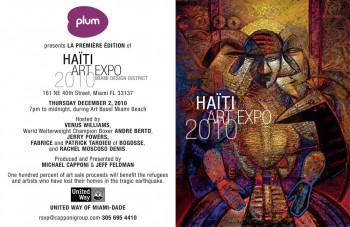 Friday, December 3:
Open to the Public, Hosted by: Britta Hanson

Saturday, December 4:
SCOPE for Haiti
Reception at SCOPE: 5pm -7pm
Reception at Haiti Art Expo: 8:00pm
Hosted by: Michael Capponi, Anna Mixon, William Etundi
Haiti Art Expo and SCOPE have joined forces to celebrate Haitian Art and raise money for housing in Haiti. SCOPE VIP cardholders are invited to the SCOPE Pavilion from 5pm to 7pm for a special reception hosted by Haiti Art Expo. Guests will be escorted after the reception at Haiti Art Expo hosted by SCOPE (SCOPE for Haiti), where cardholders can view never before seen works from Haitian Artists. 100% of art sale proceeds will benefit the refugees and artists who have lost their homes in the tragic earthquake. www.scope-art.com/

Le PremiÃ¨re Ã‰dition of Haiti Art Expo 2010, by Michele Frisch, Haitiâ€™s leading art curator and collector, proudly presents a one-of-a-kind collection of Haitian artists who were never afforded the opportunity to display their works outside of their small island nation.

Haiti, a country most known for its abject poverty, political corruption and the recent catastrophic earthquake, is extraordinarily rich in culture, history, music and the arts. Upholding Haitiâ€™s unique tradition of inspirational, Creole-themed contemporary art, these works are certain to heighten the senses through an exotic use of Caribbean colors, shapes and forms.

Haiti Art Expo 2010 demonstrates the visionary power of Haitian visual art that has continued to command international attention. This stunning collection of fine arts is comprised of a variety of media, objects dâ€™art and photography. The exhibition features top works from the world-famous contemporary art master, Philippe Dodard, as well as many works by renown Haitian artists such as Levoy Exil, Payas, Alix Roy and Lousiane. Extremely talented, up-and-coming Haitian artists such as Sully Gutemberg and Manuel Mathieu will also be featured.

Haiti Art Expo 2010â€™s high-profile venue is centrally located in the heart of Miamiâ€™s uber-chic Design District. One hundred percent of art sale proceeds will benefit the refugees and artists who have lost their homes in the tragic earthquake. United Way of Miami-Dade is serving as fiscal agent for Haiti Art Expo.

American artists have also donated works. A large Haitian Flag, by iconic Pop Artist Romero Britto, will be displayed along with a number of photographs from various photographers who were on the ground immediately after the January earthquake. Photographer Sarah Brokaw, commissioned by the Jenkins/Penn Haitian Relief Organization, will showcase a â€˜Limited Editionâ€™ collection of images taken in Haitiâ€™s largest tent city. Each limited print will be personally signed by Actor/Humanitarian Sean Penn.

Today there are still over 1.5 million homeless people who lost their homes in the January 12th earthquake in Port-au-Prince.

Plum-TV is THE 24-hour life and style network for millions of active, influential and educated people. The on-air, online and print destination of choice for an audience that, skis in Aspen, summers in Nantucket, gathers in the Hamptons and parties in South Beach. With a staff of “insider” contributors from the worlds of entertainment, fashion, finance, food and outdoor sports, Plum is designed to help successful people make great choices to enhance their lives. From new products and services, to travel and adventure, to philanthropy and the arts, Plum combines the power of hyper-local with quality national programming to create the ultimate rich media experience.

Michael Capponi and Jeff Feldman became actively involved with Haiti from day one. Each on separate, but similar missions, they assembled teams, collected donations locally and have been to Haiti a combined 40 times on relief trips since January 12th.

Michael Capponiwas on the ground just 5 days after the tragic earthquake with a team of Miami Beach firefighters on a life safety mission, assisting with medical aid to as many Haitians as possible. Upon returning and after seeing the immediate need for additional support, Michael organized several fundraisers in the Miami Beach area to raise funds for tents, food and medical supplies. His success was overwhelming, and was able to take his action plan one step further. With the support of United Way and Project Medishare, Michael set up a tent community in Belvil, Haiti within Port Au Prince. He has done his best to provide food, water and tents for almost 5000 Haitians (850 of whom are children) since the earthquake.

Jeff Feldman has been visiting Haiti for several years and was deeply compelled to travel there only six days after the earthquake. Since then, he has returned to provide emergency relief and support to several organizations on the ground. After leading hundreds of volunteers in Miami Beach and receiving donated supplies and medications, Jeff was able to work with a top-flight medical organization in Miami to ensure immediate delivery of critical supplies directly into Haiti. Over the last 10 months, he has dedicated his life and worked closely with several logistical, medical, and relief organizations throughout Haiti and continues to provide resources to the people in most need.