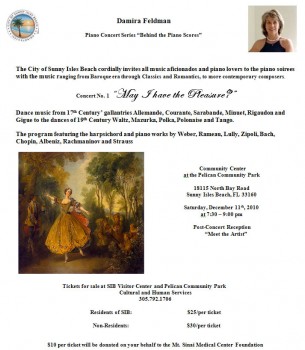 The Program is enhanced by the presence of a large-screen projection of the Art works by Edgar Degas, Giovanni Domenico Tiepolo, Nicolass Poussin, Pieter Bruegel the Elder and Nicolas Lancret. Also included are illustrations from Il Ballarino by Fabritio Caroso da Semoneta (1581) as well as rarely seen examples of the complex floor intricate serpentine patterns and the dance notation with music from The â€œChorÃ©graphieâ€ by Raoul Auger Feuillet, published in 1700. We will also be featuring â€œThe Dance Instructionsâ€, â€œLe maÃ®tre Ã  danser Â» by Pierre Rameau (1748) which was originally conceived as a method whereby courtiers of the Royal court of King Louis XIV could learn the fashionable dances of the French noble style.