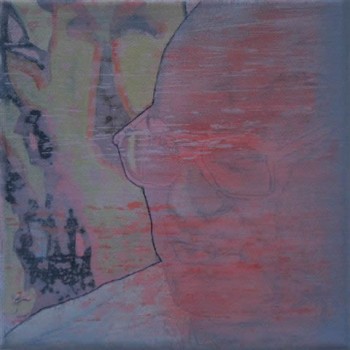 In The Main Space of the Gallery we show the Berlin based Painter Gerit Koglin with his Exhibition â€œ33 Momentsâ€. The artist has taken 33 Moments out of the New Miami Documentation Film Scissors and Glue.

The Exhibition shows Portraits of 33 men and woman out of the film. You see intimate Moments with people like Dennis Sholl or Jason Rubell but also people from the Street or young Rappers in Little Haiti. Gerit Koglin is one of the most spoken young Painters in Germany , He graduated 2009 at the Berlin Art University in Berlin Weisensee and there is an actual Review about his work in the Capital, the mayor International Economy Magazine in Germany.

In the Video space we show the just finished Video ,â€The Truth is somewhere beyondâ€ of Andrius Kviliunas. He is born and lives in Lithuania. The video shows a fiction documentation film inside the still existing but now empty nuclear base in Lithuania. In 1960 more than 10 000 Soviet soldiers started secret works in the Å½emaitija National Park that took 2 years. The out of the way forest near PlungÄ— was carefully chosen to become a secret base to carry the Soviet Nuclear Weapons. The base was one of the top Soviet military secrets that was revealed by USA reconnaissance in 1978.The Video asks the impossible question to answer: what would be if had been…

Galerieschustermiami
Right in the middle of the Wynwood Art District at the corner of 21st Street, Gallery Schuster from Berlin has opened 2009 his Miami Gallery. After six successful years of participation in Miamiâ€™s art fairs, Gallery Schuster considered 2009 just the right timing to renew their commitment to this location and bring real exhibitions into a real gallery.
With their two galleries Schuster and Schuster Photo they have been an integral and
Constituting factor in the contemporary art scene of reunified Germany. This is
Underpinned by more than 200 exhibitions and over 50 participations in various art
fairs around the globe. An intense network and cooperation with major museums and
Prominent collectors ensures a global footprint and regular interaction with the trendsetting
Leaders in the contemporary art scene.
According to New York Times, art quartier Heidestrasse in Berlin, right beside
Berlinâ€™s museum for contemporary art, Hamburger Bahnhof, ranks high under the
Worldâ€™s leading art spots. This is where the two Schuster galleries are located.

Scissors & Glue
Zuckerfilm Productions from Berlin is proud to present the trailer for its new documentary film, Scissors and Glue – The Miami Project. The film is an intimate look at a young city with an old soul. This documentary examines the way in which artistic expression and exhibition relates to and also influences community development. Scissors and Glue – The Miami Project dares to ask,
Which is more powerful, cultures influence on art or arts influence on culture?

Scissors and Glue – The Miami Project follows Helmut Schuster on his journey from gallery owner in Berlin to the founding of his new Gallery Schuster in Miamis Wynwood district. Drawing inspiration from Miamis recent art renaissance, this film uses his experiences to illustrate the international draw of the citys art scene. Scissors and Glue – The Miami Project features discussions with many of Miamis art community members including: Bonnie Clearwater (MOCA), Rosa De La Cruz, Thea Goldman, David Lombardi, Thomas Collins (MAM), Jason Rubell (The Rubell Family Collection), Terry Riley, Dennis Scholl (The Knight Foundation and World Class Boxing), Silvia Karman Cubina (Bass Museum), Katherine Hinds (The Margulies Collection at the Warehouse), Constance Margulies (The Lotus House), Craig Robins, Fred Snitzer, and many more. This documentary addresses the role and responsibility of art in urban society, while highlighting the unique nature of Miamis people and their relationship to the arts.
For Screening Dates go to www.O-Cinema.org.