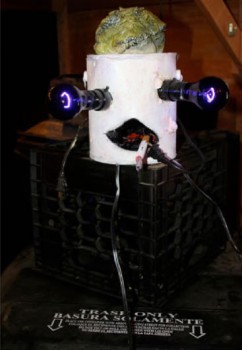 An Opening reception for the artist will be on Saturday, November 13th, 7-10 pm.

Pylypchuk has long made a world of anthropomorphized animals stuffed and suffering a multitude of mishaps. These unfortunate beasts reveal stories of dispossession and neglect, exhibiting a world-weariness that is somewhat comical. Pylypchuk’s audiences are outsiders in the realms he fabricates, excluded from the secrets kept and the games played, yet privy to the way in which these created worlds reflect their own, however brutish and disturbing this reflection may be.

“One of the most enjoyable and unsettling aspects of walking through this exhibit is experiencing the alienation effect triggered by the scale of each work. The pieces are hung from floor to ceiling, towering above or meeting the viewer at eye level. They impose their presence upon the gallery space, diminishing those who stand in their midst by violently returning their gaze.” Megan Stewart, Montreal Arts Uncovered

Born in Winnipeg, Canada in 1972, Pylypchuk lives and works in Los Angeles. He studied at the University of Manitoba School of Art, where he co-founded the collective known as the Royal Art Lodge in 1996. Two years later, he moved to Los Angeles, receiving his MFA from UCLA in 2001. Capturing international attention, Pylypchuk’s work has been exhibited extensively in the United States, Europe and Asia. At present, Pylypchuk is in a solo exhibition at the Musee d’art contemporain de Montreal until January 4, 2011.