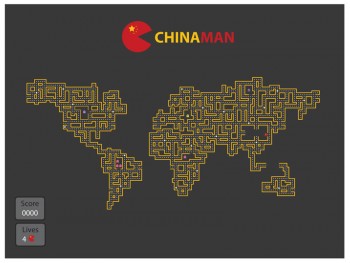 During Art Basel Miami Beach 2010, mixed media artist Claudia Calle will unveil ChinaMan, an interactive new media installation modeled after the iconic Pac-Man arcade game. The piece will be fully functional as a video game, concluding a year of work that examined environmental, sociological and cultural issues in China through various media.

With ChinaMan, Calle bluntly tackles the paradigm of production and consumption on a global scale. The china-man protagonist, a mobile red circle thatâ€™s hungry for energy, must travel through a labyrinth shaped like a world map. Countries fuel the figureâ€™s appetite with their consumer demands, as it moves through the maze eating pellets or resources. The ghosts, which in the original narrative chase Pac-Man, here represent nations that are financially, politically or morally numb. In Calleâ€™s prototype, they are relatively static and can be eaten by the china-man.

â€œI created ChinaMan as an awareness tool, waking-up people to how our way of living fuels their manufacturing and production processes,â€ said artist Calle. â€œWhen I visited China in 2007, the sun was eclipsed by smog and grey. They are contaminating their own country, but really arenâ€™t much different than the rest of us â€“ people, corporations, industries and governments -who self-sabotage for personal gain. Hopefully this piece will send a message in a format people will respond to.â€

As an interactive installation, Calleâ€™s concept will come full circle when the viewer plays the game. Manipulating the controls to guide the china-manâ€™s journey is an allegory of how every day, individual actions contribute to facets of Chinese mass production, and ultimately, to societyâ€™s collective waste. The authentic Pac-Man soundtrack has been adapted by Mr. Pauer (www.mrpauer.com) to fit the theme.

In an article published in The New York Times in May 2010, Chinaâ€™s â€œsurging demand for power from oil and coal [had] led to the largest six-month increase in the tonnage of human generated greenhouse gases ever by a single country.â€ Though to a large degree, the increasing use of fossil fuels represents Chinaâ€™s shifting economic base â€” away from light export industries such as garment and shoe production and toward energy-intensive heavy industries like steel and cement manufacturing â€“ ChinaMan explores the main playersâ€™ roles, both virtually and literally, in this archetype.

The Art Basel celebration open to the public, including the exhibition of Calleâ€™s Peopleâ€™s Republic of China collection of photographs, is slated for December 4 at 7:00 p.m. The Peopleâ€™s Republic of China series was selected by International Photo Awards among 15,000 submissions spanning 103 countries; and were further hand-picked by renowned curator Adriana Teresa to appear in the IPA â€œBest of Showâ€ Exhibit. Calleâ€™s Wynwood studio hours December 1 to 5 will be 11:00 a.m. to 7:00 p.m. or by appointment at 305.903.6026. For more information please visit the website at www.claudiacalle.com.

About Claudia Calle
Born in Manizales, Colombia, Claudia Calle has resided in Miami for more than 10 years. The vibrant artist whose designs and photographs capture poignant everyday moments, both locally and in foreign countries, opened an eponymous studio in Wynwood during Art Basel 2009 at 2722 NW 2nd Avenue, Miami FL 33127. Calle studied photography and graphic design at the Caldas University in Colombia, the Audiovisual Art Center in Mexico and at Miami AD School. She is the recipient of numerous awards including two honorable mentions by the prestigious International Photography Awards with her series Living in Silence and Between Frontier: The Longneck Story (2009); â€œFive Minutes of Fameâ€ by the Museum of Contemporary Art (2009); and Photographer’s Forum â€œTop 100 Best Photography Worldwideâ€ (2002). Please visit www.claudiacalle.com for more information.