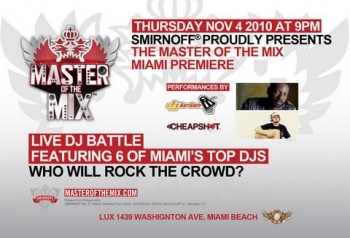 The event will also feature tasting stations for all those who missed out on the Peopleâ€™s Challenge at Grand Central, where Smirnoff was chosen over the competition by 2 out of 3 attendees. Doors open at 9pm and complimentary Smirnoff cocktails including â€œThe Equalizerâ€ will be offered to guests until midnight.

About the Show: The new original competition series MASTER OF THE MIX will be hosted by award-winning producer Just Blaze, the show takes the worldâ€™s most popular DJs and challenges them to compete for the title of MASTER OF THE MIX, take home $250,000 in cash and prizes, including a custom-made SMIRNOFF bottle. The competing cast includes: DJ Jazzy Joyce, DJ Mars, DJ Rap, DJ Revolution, Rich Medina, DJ Scratch and DJ Vikter Duplaix.