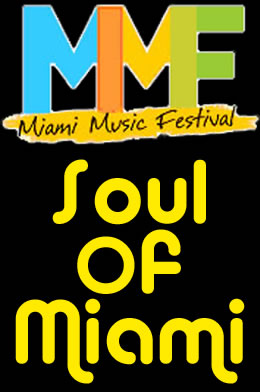 – – –
Twitter Hashtag: #sommmf
Short link: http://bit.ly/sommmf
Facebook evite.
– – –
Stage Tickets only $10!
Weekend Pass $25
Buy Advance Tickets Online Now!
– – –
* Yellow Submarine food truck onsite starting at 7:00pm.
9:00pm: Underground Junction featuring Steven Bauer
10:00pm Coffee House Gypsies
11:00pm: Cat Shell
12:00am: The State Of
1:00am: Pocket of Lollipops
* Hosted by model/actress Marissa Hopson!
* A fashion showcase of south Florida designers by Fab C Productions.
* Art byÂ Jennifer Maria Cordoba
– – –
The Soul Of Miami proudly presents a south Florida Showcase!
Join Soul Of Miami for a spectacular night of handpicked music! We could not showcase all the awesomeness of south Florida, but we found five very cool and very diverse bands to give you a sampling of the musical talent gracing our area. We also have a special fashion show of local designers to entertain you while the bands swap out. And a fabulous hostess to enliven the entire night. One of south Florida’s great food trucks will be onsite to satisfy your hunger. This is all taking place inside a brand new venue! You know we only bring you the good stuff, so you know this is going to be a great night. This is truly the Soul Of Miami!
– – – 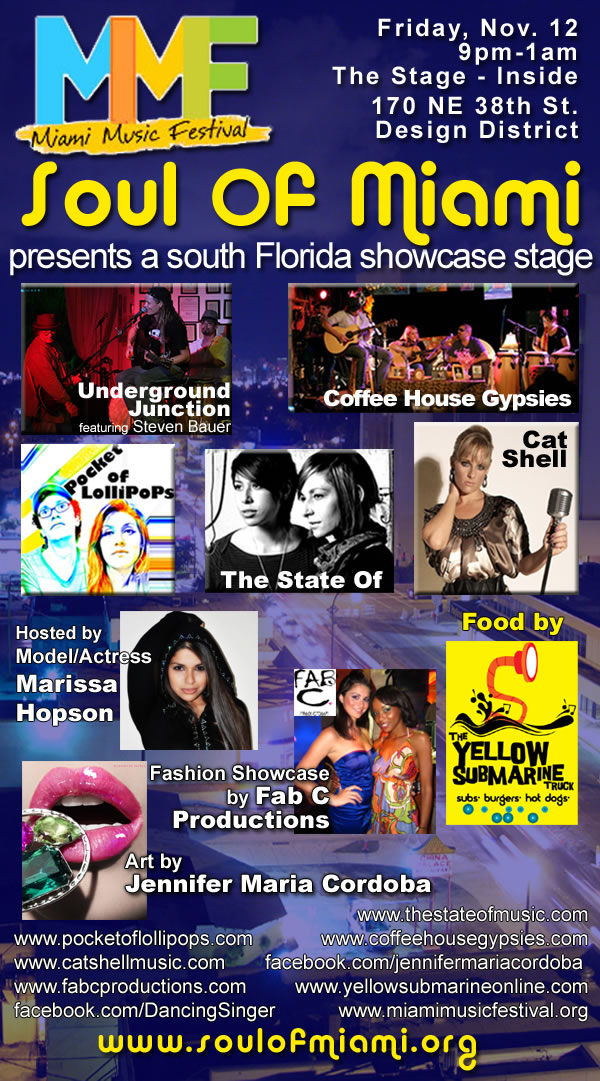 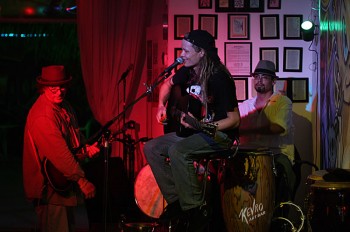 Underground Junction featuring Steven Bauer
As a group, Underground Junction is inspiring to watch and even more pleasing to listen to. When you go out to a show, you want the band to look like they are having fun and you want the music to be pleasing to the ear. Primarily a 3-piece band, these guys know how to really blend their instruments together, however extra musicians and â€œsit-insâ€ are always added. This year Underground Junction will be performing at The Miami Music Festival with Actor/ Singer/Songwriter Steven Bauer. The band consists of â€œrealâ€ professional players with years of gigging experience. Chico Brown lays down the sweetest beats on a totally new and unique acoustic drum set up that features a 3-piece Conga set-up with Kick Drum and added toys. Glenn Goss is truly a Pro, with a great attitude and personality. BillyG brings his own unique rhythm style of Acoustic Guitar playing added to his even more unique vocal styling. If you are looking for a totally entertaining show with a lot of energy, great stage performance and a great set list then you want to see these guys perform.
– – –

Cat Shell
Cat Shell is a singer/songwriter residing in Miami Beach. Since 2007, Cat has been playing throughout South Florida and performs regularly at the area’s top venues, including The Van Dyke Cafe, B Bar at The Betsy, The Florida Room in Miami Beach and many more. Growing up with a family in radio and musical theater, Cat was introduced to a wide variety of music at a very young age. Her style is reflective of such an eclectic blend, infusing the sounds of old jazz & soul with today’s pop and R&B elements. Cat debuted her first independent album “Cat’s Outta the Bag” in December 2007 and is currently recording her sophomore release due out in March 2011. For more information, visit
www.catshellmusic.com.
– – –

Coffee House Gypsies
Both The Miami New Times and The Miami Herald compared The Coffee House Gypsies to the likes of great rock legends such as Fleetwood Mac and The Mamas and The Papas. Sun Sentinel called them “a band of nomads that keeps moving through different styles and genres.” The band has performed all over Florida and in New York City and has won several awards including one South Florida QOOL Shows Award for Best Pop Band and nine STATUS QuO South FL Live Music Awards in 2008 (including best show, best vocals, and best cover song) after receiving nominations in ten different categories. The band has a standing residency at Miami’s oldest and most famous bar and live music venue, Tobacco Road. The band maintains a very active role in the South Florida community, doing regular charity events and benefits for: Camillus House, Care Resource, AIDS Walk Miami, Best Buddies, The Susan G. Komen Foundation, and more. Currently the band is completing a new album.
www.CoffeeHouseGypsies.com
– – –

The State Of
The State Of is the product of the marriage between Steph Taylor’s edgy piano/synth playing and Nabedi Osorio’s electronic-like live drumming. Their dark pop sensibility is born out of their hometown of Miami, FL and is reminiscent of artists ranging from the Bjork and the Eurythmics to Radiohead and the Cure. Taylor’s style of playing is often percussive and dark where Osorio’s drumming is melodic and when coupled, they create a dynamic sound larger than whatâ€™s expected out of two people.
www.thestateofmusic.com
– – – 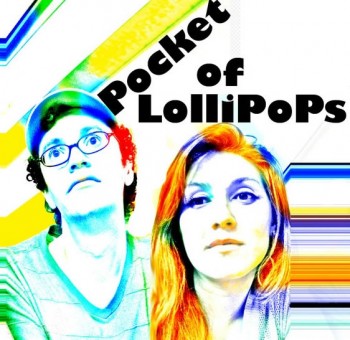 Pocket of Lollipops
Visual art and indie musical performance group Pocket of Lollipops brings together the talents of husband and wife team Tony Kapel and Maitejosune Urrechaga. The Miami based duo have performed at various art spaces and live music venues around South Florida and the U.S., including Dorsch Gallery, Hollywood Art and Culture Center, and more traditional rock settings. They define their musical genre as sophisticated punk rock; their sound is noisy but organized, thoughtful and melodic. With Maite on bass and Tony on drums, their music is directly influenced by David Byrne and Lou Reedâ€™s live performances; they identify with Sonic Youth, another band that features a musical collaboration by a married couple.
www.pocketoflollipops.com

– – –
Host: Marissa Hopson
In May, Ft. Lauderdale’s own Marissa Hopson was crowned Pantene’s First Reality Hair Star. As Pantene’s hair star Marissa has been a part of numerous photoshoots, filmings, events, and talk shows. Don’t be fooled though, this isn’t Ms. Hopson’s first stint into the entertainment business. Marissa has been a dancer/singer her whole life, having growing up in theater, but in the past years she has added model/actress to her resume. Stay tuned for lots more coming from this hair star.
www.facebook.com/DancingSinger
– – –

Art: Jennifer Maria Cordoba
A photographer hailing from Miami, FL.
While her subject matter is diverse, her more notorious work is sensual in nature. She is the creator of the “Luscious” series- a project currently underway and delving more into her fascination with food, sex & art. One of the pieces from this series will be on display, as well another image from her monochromatic archives, “Black Mask Dream”, this Friday.
www.facebook.com/jennifermariacordoba