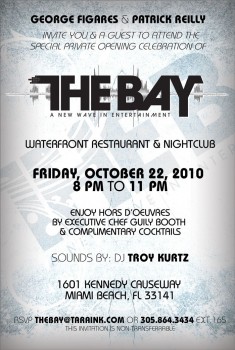 The Bay Brings New Wave Of Entertainment To Miami Beach

The Bay, a new North Beach restaurant and gay-friendly nightclub, will celebrate its debut with a private cocktail reception on Friday, October 22, 2010, 8 PM to 11 PM, along with event sponsor Florida Equality and featuring music by DJ Troy Kurtz. The indoor/outdoor space by industry veterans Patrick Reilly and George Figares is nestled against the waters of Biscayne Bay at 1601 J.F.K. Causeway in Miami Beach.

The 26,000-square-foot venue boasts a grandiose red-brick entranceway leading up to double-doors rescued from a vintage train car, a gunmetal-polished concrete floor interior, a wine room equipped to house over 1,000 bottles, four bars, an expansive waterfront terrace, and a state-of-the-art kitchen under the helm of 2010 Miami-breakout chef Guily Booth. The Bay will splash a new twist on the Causeway social scene by providing a friendly neighborhood ambiance that caters to the most cost-conscious clientele and offers unique fare and hand-crafted cocktails.

As a staple DJ figure of eight years in Miamiâ€™s gay-club circuit (Score; Twist), co-owner George Figares will use his ear for blending beats to book leading DJs of all orientations. National and local notables directing The Bayâ€™s musical score include Eddie Baez, Smeejay and Bryan Zero. Figares says â€œWe want to bring something fresh to South Floridaâ€™s gay community by taking the most attractive elements of Miamiâ€™s nightlife and setting them in a comfortable and engaging environment.

About The Bay
The Bay is a 26,000-square-foot waterfront venue providing the best in entertainment and affordable cuisine, marketed but not limited to the gay demographic. Valet and self parking are available. For more information, please call 305.866.1234 or visit www.thebaymiami.com.