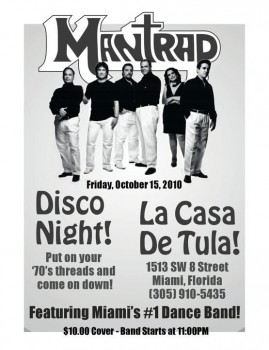 Mantrap, the legendary Miami band from the 70’s is performing live at La Casa de Tula on Friday, October 15 at 10 PM.

Bring your DISCO era attire and come to experience the music of one of Miami’s most famous band of the 70’s.

Mantrap was put together by a group of friends during the early 70’s and Reached Stardom Quickly And Drew Very Large Crowds.

In 1975 Mantrap recorded and released their first album, then, in 1977 they released their second album titled “Disco Fantasy” when Disco music was sweeping the nation and Mantrap switched styles from a rock to disco to please their fans. Disco music was fabulous for Mantrap. It took them to new heights and made them more popular than other local bands.

In May 2010, Mantrap released their 3rd production and CD titled “Lost Memories” which bring back dancers to the 70’s area one more time!

On Friday, October 15, Mantrap will perform live at Tula for a night of great music of an era that many still remember… The disco and 70’s!