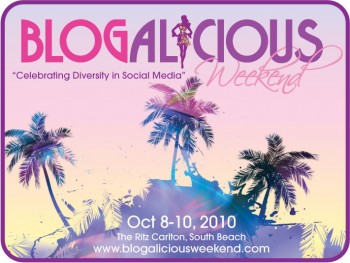 Blogalicious Weekend, the largest blogging conference celebrating diversity in social media, will host its second annual conference at the Ritz-Carlton South Beach in Miami, FL from October 8 to October 10, 2010. The three-day event dedicated to celebrating diversity in social media will bring together a group of savvy, influential and talented women bloggers to share ideas and inspiration in the context of Web 2.0.

Founded by Mamalaw.com bloggers, Nadia Jones, Nyasha Smith and Stacey Ferguson, Blogalicious Weekend was launched after these three practicing attorneys, who between them have seven children, realized that there was a dearth in the blogosphere when it came to the multicultural voices of women bloggers. They are also the founders of Mamalaw Media Group (MMG), a company devoted to raising the profile of women of color online.

â€œWe believe this is an exciting opportunity to discuss the importance of blogging across ethnic communities,â€ says Mamalaw Media Group. â€œThe conference will once again ignite a sense of unity within the multicultural blogging community, as well as educate marketers on the importance of our demographic in todayâ€™s marketplace, all while networking, building relationships, and promoting inspiration and success for each other.â€

Blogalicious 2010 is expected to have an attendance of hundreds of social media influencers from various backgrounds. Featured workshops include Marketing to Women of Color, Building Your Social Media Tribe and The Value and Metrics of Diversity at Conferences.

Marc Morial, president of National Urban League is set to appear as one of the keynote speakers. He will speak on Sunday, October 10, at 9 a.m. The National Urban League is a historic civil rights organization dedicated to economic empowerment in order to elevate the standard of living in historically underserved urban communities. The Urban League recently celebrated its centennial in Washington, D.C.

The Blogalicious Weekend conferences celebrate diversity among women in social media by offering educational, networking and social opportunities geared towards women (and men!) of all backgrounds. Blogalicious Weekend 2010, will be in Miami, Florida on October 8-10, 2010. Mamalaw Media Group, the founder of Blogalicious Weekend is responsible for other ventures, including monthly webinars called Blogalicious Bytes: Lessons in Social Media, My Blogalicious, a virtual community of contributing editors serving as a destination for news, entertainment resources and op-ed content for women of color online, and The bLink Marketing Network. For more information on Blogalicious Weekend and other projects hosted by MamaLaw Media Group, please visit http://mamalawmediagroup.com/.