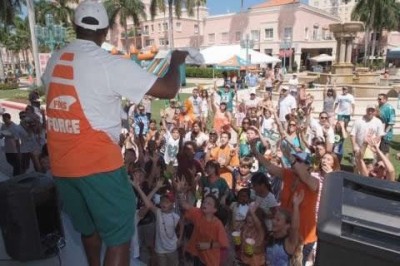 South Floridaâ€™s Biggest Away Game Party Hosted By and In Downtown Boca For Dolphins Season Opener To Draw Finatics From Miami to Jensen Beach as fans of all ages and their families, friends and colleagues are invited to cheer on their South Florida home team during the first Dolphins game of the 2010 season against the Green Bay Packers. Serving as the official kick-off of Downtown Bocaâ€™s new Super Sundays programming that will include a variety of family-friendly events throughout the year, the Dolphins and Downtown Boca are teaming up to host free and open-to-the-public festivities, including meet-and-greets, autographs and photos with Dolphins alumni including Manny Fernandez, performances by Dolphins Cheerleaders, and plenty of music, entertainment, games, giveaways and game watching. The youngest fans can play at the Dolphins Bounce House and register to participate in the Downtown Boca Dolphins Gatorade Jr. There will be a youth football clinic with Dolphin Alum and youth cheerleading clinic with Dolphin cheerleaders, while both young and older can test their skills at the Dolphins Football Toss. Throughout the day, attendees will be entertained by stilt walkers and power skippers, plus get the chance to be photographed with a â€œliveâ€ bronze football player statue and view the game on TV screens in and about activity areas. Alumni, cheerleaders, and Fins Force will be sharing the Fins spirit as they make the rounds visiting shops and participating restaurants.