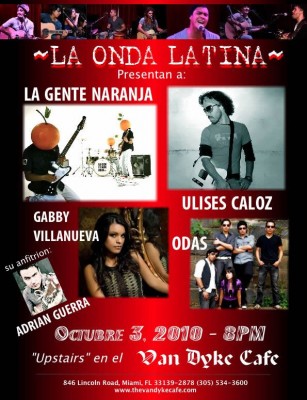 LA GENTE NARANJA
La Gente Naranja is an energetic Ecuadorian Rock en EspaÃ±ol band based in Miami, Florida. La Gente Naranja started in 2009 with band members Eddie Garcia (vocals and guitar), Jose Nouel (drums) and Diego Saa (vocals and bass guitar). The group made its first breakthrough in 2010 with the release of the music video for their first single “Luz al Sur”, and their debut album of the same name. The band was born out of a sentiment shared by millions of people with a thirst for a new sound to identify their generation withâ€¦plus, they wear oranges on their heads!

ODAS
One of the best Latino Pop/Rock bands to come out of South Florida. By popular demand, ODAS returns! Their new album â€œAl Finalâ€ is packed with amazing songs packed with stories of love, triumph, pain, and anguish. ODASâ€™ members, Karla Iriarte (vocals), Calors Iriarte (electric guitar), Victor Hugo (acoustic guitar and vocals), Camilo Machado (bass), form a powerful musical force and a â€œband to watch.â€ Formed in 2005, ODAS debut album â€œ5 Sentidosâ€ exploded in the South Florida scene and they became one of the most talked about bands. ODAS has a distinctive sound that stays true to their Bolivian roots while taking Rock/Pop to new heights and represents the potential that can be achieved as an independent band.

GABBY VILLANUEVA
Born in Mexico City and raised in Los Angeles, where she studied drama and dance, Gabby Villanueva has successfully and independently jumped-started her career. She released her 10-track album on iTunes and national retailers (without a record label) and turned heads (and ears) onto her sound, a mix of mariachi and pop-rock. She was the first indie artist to reach the top-10 on iTunes Latino. Villanueva uses her songs to talk about important issues like immigration, war, and of course, unrequited love. In 2002, she was a contestant on Telemundo’s reality show Protagonistas De la MÃºsica, and worked for Telemundo has an entertainment reporter. Gabby Villanueva is one of the few young multi-talented performers who has captured the hearts of audiences from all over the US and Latin America with her music and charismatic personality. The small screen has been part of her life, working with the most important national Spanish-speaking networks in the United States. Gabby worked on her debut album, titled “Mundos Diferentes” (Different Worlds), as singer, songwriter and producer. Most recently Gabby sang the National Anthem for the Florida Marlins at the Dolphin stadium with a sold out crowd.