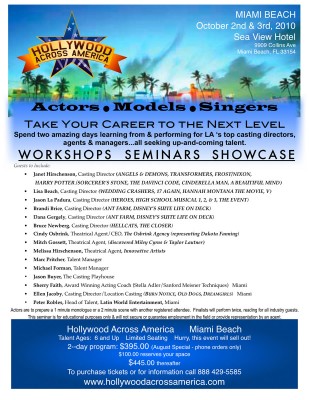 Hollywood Across America, a hands-on workshop and showcase led by entertainment industry veterans, is coming to South Florida on October 2 & 3, 2010. Local actors, models and other aspiring talent interested in learning from some of Hollywoodâ€™s top industry professionals will enjoy a weekend full of seminars, coaching and performances at Miami Beachâ€™s Sea View Hotel.

The two-day event features Hollywoodâ€™s most acclaimed Casting Directors and Agents who will observe, advise and guide local aspiring talent. â€œSouth Florida has a thriving theatrical community poised for stardom. Movies and television shows like Burn Notice, CSI: Miami and Marley & Me have definitely brought attention to this city, which makes it a great stop for our national tour,â€ said Marc Pritcher, co-founder, Hollywood Across America. â€œWe want to help people outside of Los Angeles get the opportunity to showcase their talents and receive constructive, positive feedback. Why bother trekking to Hollywood when we can bring it to you?â€

Aspiring actors will also get the chance to perform before the savvy professionals behind the famous faces in magazines, popular television shows and films. “Our workshops give you the tools you need to make it in Hollywoodâ€¦essentials including how to obtain great representation, how to market yourself, how to execute a cold reading or everything parents of young children need to know about the business,” Pritcher adds.

*Please note: Hollywood Across America South Florida was originally scheduled to take place earlier this summer, but was postponed to October due to a high demand for a fall seminar and unforeseen scheduling conflicts with the casting directors.