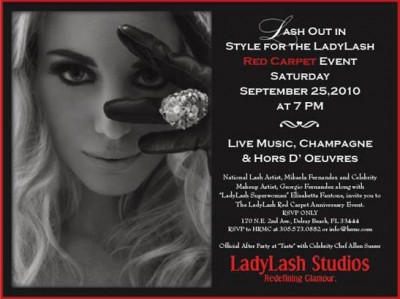 On September 25, 2010, LadyLash Studios will be rolling out the red carpet to celebrities such as the Kardashian family and Natalie Cole in celebration of the anniversary of their Delray Beach studio and to honor their LadyLash â€œSuperwomanâ€ Elisabetta Fantone. In addition to its host of celebrity guests, the event will also be attended by the fashionable and elite Palm Beach community who enjoy the services of Mikaela and Georgio Fernandez, the owners of LadyLash Studios.

World-renowned cosmetic artists and owners of LadyLash Studios, Mikaela and Georgio Fernandez, are pleased to announce the anniversary of their Delray Beach studio location, which has become well-known in the community for its status as a hot-spot for the fashionable and famous. In celebration of the establishment of their permanent Delray Beach storefront as well as the tremendous success of the LadyLash Studios Campaign with â€œLadyLash Superwomanâ€, Elisabetta Fantone; they will be hosting a private Red Carpet Event, attended by the stylish South Florida community as well as a host of celebrity special guests.

Since their Delray Beach debut, National Lash Artist, Mikaela Fernandez and Celebrity Makeup Artist, Georgio Fernandez have offered professional eyelash, makeup, and brow-sculpting services that appeal to the sophisticated South Florida community, receiving unanimous acclaim from local and national media. Such widespread praise has earned them the recognition and brand support of Pantene Reality Hair Star, Marissa Hopson as well as renowned actress and painter, Elisabetta Fantone, who has been named the â€œLadyLash Superwomanâ€.

Coined â€œChanging Lives through Beautyâ€; The LadyLash Red Carpet Anniversary Event will celebrate the opening of their Delray Beach studio and will honor their â€œsuperwomanâ€ Elisabetta Fantone. Ms. Fantone and Ms. Hopson will both be in attendance at the LadyLash Red Carpet Anniversary Event. The event will take place on September 25, 2010 at LadyLash Studios in Delray Beach followed by an after party at â€œTasteâ€ with Chef Allen Susser, a culinary master and winner of a James Beard â€œBest Chefâ€ award, one of the highest achievements in the culinary arts.

In addition to their Delray Beach location, LadyLash Studios can also be found in the Ritz-Carlton in Palm Beach at the Eau Spa by Cornelia. For more information on LadyLash Studios, visit www.ladylash.com.