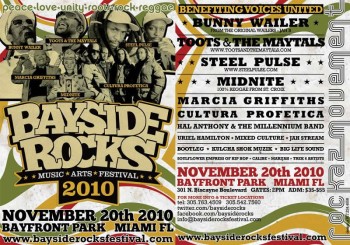 Bayside Rocks Festival is not merely an event, it is a journey directed by the unifying languages of the Arts. This festival invites the world to be a captive audience to the inherent transcending appeal of works by musical artists embodied by peace, love and unity. In This consciousness evolution we must be ready. As Gandhi so humbly said: â€œbe the change you want to see in the worldâ€ so on Saturday November 20th, Bayfront Park Miami will showcase the beauty we are capable of and an expression of the connected energies that we share hence from which we grow. We are all infinitely connected, we are all one!

The Bayside Rocks Festival is being hailed as â€œThe Woodstock of Reggaeâ€ for its nod to the nostalgic era of The Bob Marley movement with a salute to and performances by reggae icons Bunny Wailer, Steel Pulse, Toots & Maytals, Midnite and young Puerto Rican cult reggae band Cultura Profetica. Bayside Rocks Festival will be held on Saturday, November 20, 2010 from 3:00 p.m. to Midnight at Bayfront Park at 301Biscayne Boulevard, in Downtown Miami. Over 15,000 are expected to attend this all day experience that will be a throwback to the musical energy and community spirit of Woodstock.

It has been generations since a line up for reggae giants have been assembled on the same stage. This â€œonce in a lifetime experience will include three time Grammy Award winner Bunny Wailer of The Wailers, Grammy Award winning UK based Steel Pulse, the man who coined the word â€œreggaeâ€ himself Grammy Award winner Toots & Maytals, 100% roots rock reggae from St. Croix Midnite and Puerto Ricoâ€™s own cult band Cultura Profetica. Also on the bill are Uriel Hamilton, Mixed Culture, Bootleg, Marcia Griffiths, Kulcha Shok Muzic and Big Life Sound.

Bayside Rocks is an all day celebration of cultural awareness and consciousness. Over the course of the entire day, the inaugural Bayside Rocks Festival 2010 will bring over 15,000 people to Downtown Miami. This highly anticipated cultural event was designed to cater to all genuine cultural expressions.

â€œThis musical extravaganza will expose the public to music that embodies peace love and unity while immersing them in the exotic culture and dynamic energy that embodies reggae music. The line up includes the best of Jamaica, Puerto Rico, the U.K., St. Croix, and South Florida,â€ stated Bayside Rocks Festival producer, Alfonso D’Niscio Brooks.

Bayside Rocks Festival is also a â€œparty with a purposeâ€ giving a portion of its net proceeds to Voices United a Miami-based non-profit youth organization, devoted to promoting cultural diversity through the performing arts. www.voicesunited.com