What Does Walt Disney Animation, Universal Pictures, and Neversoft Entertainment Have in Common? 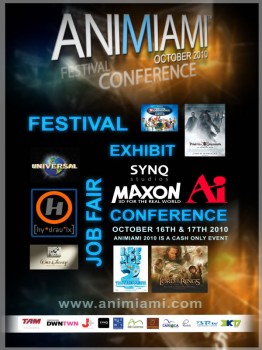 The ANIMIAMI Animation Festival and Conference in October 2010
The conference and festival will be taking place on October 16-17, 2010 hosted by Miami International University of Art & Designâ€™s downtown Miami campus.

In its inaugural year, ANIMIAMI Animation Festival and Conference will be featuring the best of non-theatrical, commercial, and video game animation combined in one conference. The conference and festival will be taking place on October 16-17, 2010 hosted by Miami International University of Art & Designâ€™s downtown Miami campus. Speakers for the conference have already been confirmed and include an international whoâ€™s who of animation and gaming as follows:

ANIMIAMI was created to increase and improve the dialogue between students, educational institutions and the animation industry in the hopes of providing students and industry leaders the opportunity to express their views and expectations while creating an informative, yet nurturing environment to help students transition from university student to industry professional. The conference will also focus on exposing the industry’s real expectations, needs and competencies required of new professionals.

ANIMIAMI will be composed of various elements: an animation festival featuring an Animation Expo of professional work, conference workshops and speakers, a job fair and an industry exhibit expo.

The animation festival will provide an opportunity for professionals and students to enter their work and compete in various categories (including student and professional categories in animation for gaming, advertising, and theatrical animation respectively).

Students will compete for internship opportunities in some of the best animation studios around the country. In addition, the festival will feature some of the best work produced by industry professionals. The conference workshops and speakers portion of the event will include the above mentioned renowned speakers. It has been designed to be a forum for active networking and information exchange with strong a commitment and emphasis on education to develop and nourish new talent. Additionally, the event will include a job fair which will provide and serve the animation industry as a resource for talent in both animation and computer graphics. Finally, an exhibit expo will bring together industry vendors that will showcase new technologies as well as advances in the industry by the leading software and hardware manufacturers around the country.

â€œWe are very excited to bring this festival and conference to life â€“ it has been a big goal of mine to gather industry and community leaders, professionals and students in an exchange to discuss industry now and where we think itâ€™s headed,â€ says Mauricio Ferraza, conference organizer. For more information on ANIMIAMI Animation Festival and Conference including event schedule, speaker bios, registration and event sponsorship, please go to www.animiami.com or email Ricardo Bandeira, rbandeira@animiami.com.