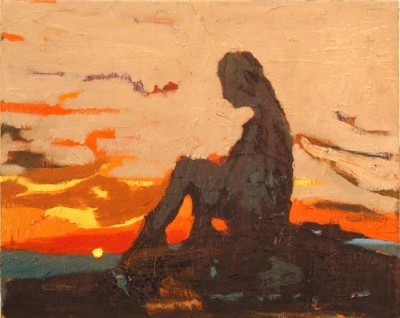 Into the Mountains
Kristopher Benedict

Gallery Diet will begin the new season in a freshly renovated and expanded 3,500 square foot space with a solo exhibition by Kristopher Benedict. In his work, Benedict has posited the idea of the painter as a kind of archetypical recluse, intending the paintings to bear out the contradictory relationship of the solitary hermetic artist verses the artistâ€™s need for social intercourse and connection with the community. Much of Benedictâ€™s work can be seen as an exploration of the act of representation, as the paintings fluidly range from figuration to abstraction with many stops in between. Particular to Into the Mountains is a take on abstractionâ€™s often-stated connection to music. Sighting works from Mondrianâ€™s â€œBroadway Boogie Woogieâ€ to Albert Oehlenâ€™s â€œMelâ€ and â€œVinsâ€, Benedict plays with paintingâ€™s potential for synesthesia and the intersection of sound, color and form. The paintings in this exhibition present a complex relationship between what is represented in the paintings and how they are being represented, between the image and the materiality.

Kristopher exhibited at Diet in a two person exhibition alongside Peter LaBier in 2009, he graduated from Columbia Universityâ€™s MFA program in 2002 and has exhibited in numerous group and solo exhibitions including After Matisse/Picasso at P.S.1/MOMA Contemporary Art Center, New York and Audacity in Art at the Orlando Museum of Art, Florida where his works are included in the permanent collection.

Gallery Diet is a contemporary art gallery located in the Wynwood District of Miami, Florida where it has existed since 2007. The gallery has produced over 25 solo and group exhibitions by new and emerging artists from around the world and has documented those exhibitions in hard cover print on a yearly basis. Represented artists include Charley Friedman, Christy Gast, Richard HÃ¶glund, Abby Manock, and Daniel Milewski.
For additional information or images please contact info@gallerydiet.com.