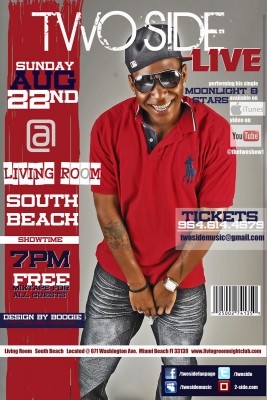 With The City Beaming Over Lebron, Miami Rapper & Producer Two Side Alsoâ€œTakes His Talents To South Beachâ€

Two Side’s next performance will be on Sunday August 22nd at 7pm in South Beach at Living Room located at 671 Washington Ave. For tickets email: twosidemusic@gmail.com.

To say that things have been a bit…nuts in Miami this summer is quite an understatement. The expectations and prayers of an entire city were met the moment some tall black dude went on TV and uttered the words “….I’ve decided to take my talents to South Beach”. You may have heard of him. That of course turned down the happy in a lot of places but, that’s for their therapists to handle. In the city of Miami, Lebron James joining Dwayne Wade, and Chris Bosh thrown in for good measure has perked the city up more than just a little bit, and game one is yet to be played. No one really cares what Charles Barkley says, not here.

A city known for it’s party atmosphere and it’s ability to make celebrities let their hair down, it is not a stranger to good times. Add to that bikinis and Lamborghini’s parading on Ocean Drive for no special reason, it’s no wonder why so many out-of-towners deposit regularly in their piggy banks for that SOBE getaway. However for Miami hip-hop artist Two Side this is home sweet home.

Local entertainment should benefit greatly from the Lebron, Wade, and Bosh triple threat, that’s to be expected. But this upswing isn’t just related to the flashy nightclubs, which already draws the stars to come out and play, but also to the local music scene which should feel the effects of the attention the city will now command. For independent artists and musicians in the magic city, that’s music to their ears. For those who haven’t really thought about it, think about it. This could actually be a sweet deal. And a much needed one.

An indie scene that sometimes seems to only live in the shadows of Miami, is alive and kicking, though sometimes kicking at the wall. There have been a few that have made it out and through the door in the name of the MIA; giving hope to those still looking for the key. The list of artists that went from the front line grind, to stardom includes names like Uncle Luke, Trick Daddy, Trina, Pitbull, Flo Rida, Rick Ross, T-pain, Plies and Cool and Dre to name a few.

As great as that list is however, it fails to give us the true feel for the amount of talent that’s simmering all across the city and surrounding area. For those that are truly about their business this could be a great chapter in the local music scene. Who will take advantage of this? What new artists will emerge as the byproduct of this madness caused by it’s friendly local basketball team? It’s not the easiest thing to predict, however Miami rapper/producer Two Side, is doing his part to make sure, he’s on that list.
Growing with the popularity of his You Tube channel thetwoshow1, and his recent performances, people are taking notice. His single, available on Itunes, “Moonlight and Stars” written and produced by Two Side (listen on You Tube) is usually all it takes for a new fan to be born. This is something this Miami rapper doesn’t take lightly.

“Man, I don’t even know what to say about the love you know? It’s nice to get that kind of response from people, you work really hard as an unsigned artist to get people’s attention, so when finally you start getting a response you know, it makes it all so worth it. I got a long way to go, I mean, I want millions of people to know my work, but I’m working on it. So far so good”

With the momentum Two Side has and the fresh new energy in the Miami air thanks to Lebron and the gang, timing could not be better for this budding artist to come out blazing like Yosemite Sam. “It’s crazy what Miami feels like right now, I’m lovin it man. My grind is always up, but this is definitely kickin’ it up a gear.”

Two Side’s next performance will be on Sunday August 22nd at 7pm in South Beach at Living Room located at 671 Washington Ave. For tickets email: twosidemusic@gmail.com.
“I’ve decided to also take my talents to South Beach on the 22nd, haha. So I’m looking forward to getting on that stage and do what I do at Living Room. Those who’ve gone to a show, you know how I do it. Those who haven’t, come through and get to know Two Side. It’s could be the start of long relationship.”

For Two Side, the Miami Heat, and the city of Miami….IT’S SHOWTIME.

Boogie J.M. is a Marketing & Promotions Consultant for independent bands.Boogie assists his clients in core areas such as: Product development, campaign design and execution, and effective business operation for the indie musician.
For any questions regarding this article or his work, email: Boogietip@gmail.com
Two Side YouTube: www.youtube.com/thetwoshow1