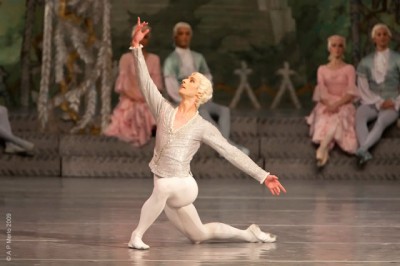 The XV Anniversary International Ballet Festival of Miami will take place August 27th through September 12th, 2010. The Festival will open with the Official Poster Unveiling by Spaniard Artist Pilar Cossio with her personal exhibition “La Leï¿½on de Danse” dedicated to the Festival and the launching of the Dance Film Series at the historic Tower Theater in Miami on Friday, August 27th. The Film series continues at the Lehman Theater, Miami Dade College North Campus.

The IBFM also includes a unique spot for young talent organized with the foremost competition organization “Youth America Grand Prix” Director, Larissa Saveliev: the International Young Ballet Medalists Performance at the Lehman Theater in Miami is on September 3rd and Contemporary Performances at the Colony Theater in Miami Beach on September 4th and 5th with the first appearance of the Balleto Teatro di Torino and other national and international companies.

The IBMF is one of the most successful festivals of its kind in the U.S. featuring world-wide prestigious ballet companies represented by their greatest stars.
The Etoiles Grand Classical Gala will take place at the great historic Fillmore Miami Beach at the Jackie Gleason Theater on September 11th, where the Lifetime Achievement Award “A Life for the Dance” will be presented to Milorad Miskovitch. Miskovitch is a famous dancer/director of the 20th century. The Festival Closing Gala at the Jackie Gleason Theater will take place on September 12th where a second award, Criticism & Culture of Ballet, will be presented to the famous Danish dance critic and author, Erik Aschengreen.

THE FESTIVAL WILL ALSO INCLUDE THE FOLLOWING ACTIVITIES: