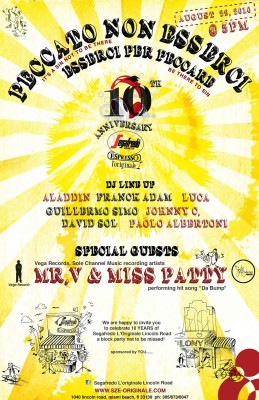 Segafredo on Lincoln Road, also referred to as Lâ€™Originale, will be celebrating its 10th year in business as the first Segafredo branch to open in Florida, on Sunday August 29th, 2010 at 5pm with a block party, music by DJ Mr. V. and Miss Patty, and giveaways!

Segafredo Lâ€™Originale has been the gathering spot for thousands of locals and tourists since its doors opened in 2000 under the ownership and management of Graziano Sbroggio and Mark Soyka. The boutique Italian cafe received a boost to its popularity with the innovative and dynamic concept brought in by Luca Voltarel, then manager, today a partner, of serving cocktails and playing great music – one of Voltarelâ€™s true passions.

The success was almost immediate and Segafredo developed a cult-like following made up of skateboarders, beach-goers, club-goers, pet-lovers and an infinite mix of extraordinary personalities from all over the world! On August 29th 2010, the block party celebration will showcase the best of what Segafredo has to offer: music, dancing, drinks and the eclectic clientele that defines South Beach.

A stage will be set up on Lenox Avenue where DJ Mr. V. and Miss Patty will be spinning their best tunes with roadblocks surrounding the immediate area for the occasion. Mr. V. is known for his original productions and remixes taking a trip back in time to dance musicâ€™s golden age. His music embraces peopleâ€™s differences and creates a homogeneous vibe, a perfect match to Segafredoâ€™s loyal customers.

Although the buzz is always palpable directly in front of the venue, simultaneously, Segafredo is able to offer a perfect balance with different environments such as romantic tables by the fountain or lounge chairs and sofas under the trees for drinks with friends. â€œTo each his or her own groove,â€ explains Luca Voltarel, partner and manager of Segafredo. â€œWe wanted everyone to find his or her own comfortable spot to relax and enjoy the music.â€

Miss Patty, joining DJ Mr. V. on stage, will showcase her unusual vocal talent mixing tribal, free spirit and bohemian styles. Her mantra is to find sounds that speak to her from disco and funk to opera and folk, and inspire her to create her own harmony. â€œMiss Patty brings together the eclectic crowd we nurture and cherish at Segafredo,â€ compares Voltarel.

With an expected attendance in the thousands, satellite bars will be strategically set up throughout the enclosed area. Activities and surprises are planned but will not be divulged. For daily updates about the 10th Anniversary, please become a fan on facebook of Segafredo Lâ€™Originale or for more information please call 305-673-0047 or visit www.sze-originale.com Servers will request valid identification when serving alcohol.

Segafredo Lâ€™Originale Fun Facts:
Mario, the red mosaic penguin mascot in front of Segafredo joined the family in 2006 as he represents the symbol of hospitality.
On average, 700 people come to Segafredo everyday.
Halloween 2009 was the peak of attendance for Segafredo with 4,500 costumed customers that night. Mario, the mascot, gets dressed up every Halloween and other occasions as well.
Segafredo Lâ€™Originale has 3,471 fans on Facebook.
Since 2000, Segafredo has served: 35,3700 classic mojitos, 25,320 bottles of Prosecco and 215,940 bottles of Peroni.