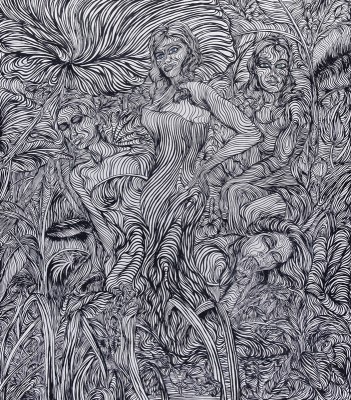 Rhythmic Paintings is a series of works created by using a stream-of-conscious modality where Cabeza creates movement through curved, ebbless sequential patterns. The feminine form is prominent, as are vividly colored eyes that peer out through the thoughtful maze of strokes. The collection includes 15 works comprised of paintings, dÃ©coupages and objects.

â€œCarlos Cabezaâ€™s work is based on continuity and the rhythm of movement within a space. His inspiration comes from a spiritual point-of-view and flows from his mind onto the canvas â€“ almost as if whistling,â€ said Ascanio. Renowned art critic and cultural historian Alfredo Boulton has said of him: â€œThe individuality of Cabezaâ€™s expressiveness places him in a special niche within contemporary painting.â€

Born in Villa de Cura, Venezuela, Ascanio is an accomplished gallerist, artist manager, publisher and collector. He began his art career at the age of 17, while apprenticing with Alfredo Boulton. And in 1974 he co-launched Ediciones Macanao, a publishing company he formed with Boulton and op, kinetic artist Carlos Cruz Diez.

In 1978 he opened his first gallery, Estudio 1, in Caracas which was dedicated to promoting and selling the works of Jesus Soto, one of the worldâ€™s most famous contemporary artists. And in 1984 he opened Galeria Oscar Ascanio also in Caracas where he featured artists that included Alejandro Otero, Edgar Negret, Lina Sinisterra, Victor Lucena, Francisco Salazar, Bernar Venet, Bernard Aubertin and Fernando Mignoni.

Born in 1953 in Villa de Cura, Venezuela, Ascanio quickly ascended the ranks of Venezuelan society and style. At the age of 17, he immersed himself in art history and theory while apprenticing with the renowned Alfredo Boulton. An art critic, cultural historian and photographer, Boulton was instrumental in the development of Venezuelaâ€™s modernist and contemporary art movement.

This experience and his affinity for art history led him to trade medical school for a Masters degree in economy from Universidad Catolica Andres Bello in 1972. Two years later, he launched a publishing company coined Ediciones Macanao with Boulton and kinetic, op artist Carlos Cruz Diez.

The company was named after a cocktail Boulton invented and dubbed Macanao while at his grand estate in Margarita Island with his wife Mirta, Ascanio and Cruz Diez.

Ediciones Macanao was dedicated to producing literature on the study of Venezuelan art and related topics. The company published a bevy of books on Venezuelan artists that included Jesus Soto, Hector Poleo, Armando ReverÃ³n and Rafael Monasterios. Also featured in Ediciones Macanao, was Simon Bolivarâ€™s iconography, among others.

In 1976, Ascanio collaborated in the organization of an exhibition of Sotoâ€™s work in New Yorkâ€™s Solomon R. Guggenheim Museum. Two years later he founded Estudio 1, a gallery dedicated to Sotoâ€™s work, and became Sotoâ€™s agent and legal representative. He also represented other emerging and established Venezuelan artists during this time.

Soto is regarded as one of the worldâ€™s most famous contemporary artists. He is considered a forefather of kinetic art, and a number of his paintings can be found on the walls of the most prestigious museums or in the hands of respectable collectors.

Ascanio commuted between Paris and Caracas for four years starting in 1978 with the purpose of organizing art exhibitions. He also used this time to refine his knowledge of art history through liberal studies at UniversitÃ© Sorbonne, Ã‰cole du Louvre and Centre Georges Pompidou in Paris.

Oscar is currently a member of the Wynwood Arts District Association (WADA). He has two sons: Nicolas, 27, and Alfredo, 20. Both are involved in their fatherâ€™s business and will help run the gallery as Ascanio commutes between Miami and Venezuela.