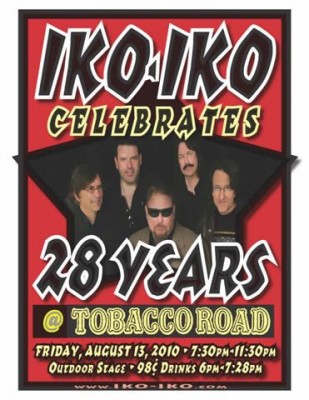 Tobacco Road officially reopened under the current ownership on Friday, August 13th 1982. It was quite a party. Blues, booze and schmooze.

Over the years Tobacco Road and IKO IKO changed the course of live music in South Florida. Here they are rocking together twenty eight years later and the band is still kicking harder than ever.

For more about IKO-IKO plus for links to their Facebook, Twitter, MySpace, iLike, ReverbNation, iTunes and more, visit:
www.iko-iko.com