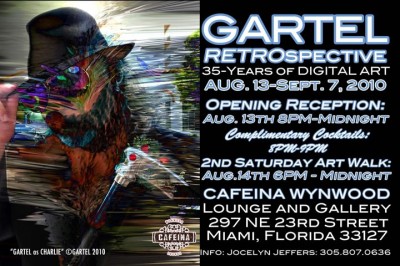 Laurence Gartel diverts the inquisitive viewer of contemporary artistic practice miles from the preconceived notion of Computer Art into the realm of Fine Arts. For 35 years he has given the world a tangible and idealistic metaphor of the true meaning of an artistâ€™s innovative discovery of what is considered â€œNew Media.â€ His heroic artistry has propelled a cultural paradigm shift, and without his constant drive to push the boundaries of technology, the Digital Age would have not have been elevated to the aesthetic levels it has. Gartelâ€™s use of new software and hardware as â€œdynamic brushesâ€ paints a profound picture of â€œtechnology on canvas.â€

As a pioneer of Digital Art many notable institutions have been captured by the strong concept of his pieces. He is the first Digital Artist to have his work in the permanent collection of the Smithsonian Institutionâ€™s Museum of American History, and in 2007 a 1978 Digital Art video became a permanent part of the Collection at the Victoria and Albert Museum (V&A) in London. In addition, in 1990 his Polaroid installation titled â€œMoz Oceanâ€ was exhibition with the Museum of Modern Art (MOMA) in New York City. Gartel has exhibited in many other renowned institutions all over the world such as his upcoming contribution to â€œComputerkunst 2.010 at Museum der Stadt Gladbeck, Germany.â€

Artists such as Andy Warhol have enlisted Gartel to teach him how to operate the Amiga Computer while he was creating an album cover for Debbie Harry (Blondie).Gartel has been commissioned by other celebrities like Britney Spears, Justin Timberlake, Versace others. On Friday August 13th, Cafeina Wynwood Lounge and Gallery, 297 NW 23 St. Miami, Florida will premier a thirty-five year retrospective. The exhibition will travel through the decades, with Laurence Gartelâ€™s works as an â€œAutobiographicalâ€ guide.