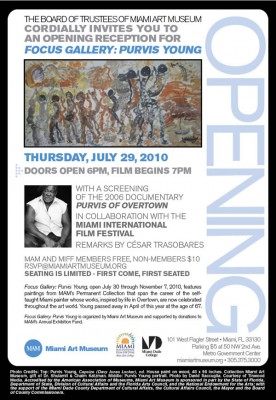 In collaboration with Miami International Film Festival, Miami Art Museum will mark the opening of a Purvis Young focus gallery with a special screening of the 2006 documentary: Purvis of Overtown. Opening remarks will be given by CÃ©sar Trasobares.

Miami Art Museum will open a new exhibition in the Focus Gallery section of its Permanent Collection installation, dedicated to works by the late Purvis Young. Focus Gallery: Purvis Young (July 30 – November 7, 2010) features a selection of Youngâ€™s paintings from the museumâ€™s permanent collection that span the career of the celebrated, self-taught Miami painter who passed away in April of this year at the age of 67.

Purvis Youngâ€™s work reflects the condition experienced by residents of Miamiâ€™s Overtown, the historic African American neighborhood that was transformed from a thriving community to an impoverished inner-city environment in the 1960â€™s and 70â€™s, when interstate 95 was erected. Against this backdrop, Youngâ€™s work serves as inspiration for the capacity of the creative spirit to reclaim, transform, restore and renew. 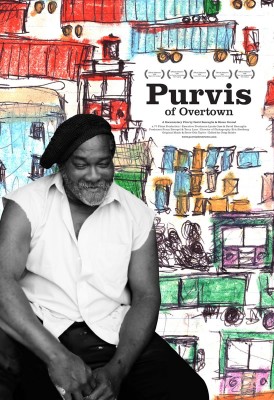 â€œThrough the decades, Young served as an eyewitness to changes in social conditions and Miamiâ€™s transformation from a modest city to a bustling metropolis that now carries many of the social, economic, and political problems that come with being a large city,â€ said Peter Boswell, MAM assistant director for programs/senior curator. â€œIn this context, Youngâ€™s paintings act as a form of protest against injustice and as a testament to the resiliency of the human spirit in the midst of often dehumanizing urban conditions.â€

Purvis Young is often and erroneously referred to as an â€œOutsiderâ€ artist, a term reserved for untrained artists with no concept of art, other than their own. Contrary to the term â€˜Outsiderâ€™, Young was inspired by what he saw and read of the works by Van Gogh, Rubens, Rembrandt and CÃ©zanne from books in the public library, as well as National Geographic magazine and public television documentaries. He was introduced to art as a child by relatives who were figurative artists and cartoonists. Although he was never formally trained, Purvis Young was socially and artistically aware. Limited in the resources available to him at the time he began painting, Young used whatever materials he could find on the street, scrap lumber, parts of packing crates, and cast-off doors. He initially gained public attention over 25 years ago by hanging his paintings on the fences and exteriors of buildings on a three-block length of NW 14th St. in Overtown known as Goodbread Alley. Even after gaining fame and financial stability, most of his paintings were executed with house paint on wood that has been exposed to the elements, resulting in the extremely raw quality that his work displays. His imagery includes wild horses, marching people, railroad tracks, pregnant women and angel heads. Young has explained that they represent various life experiences and that they each symbolize a vision of hope.

Miami Art Museum, a modern and contemporary art museum located in downtown Miami, FL, serves one of the most diverse and fast-growing regions of the country, where a confluence of North and Latin American cultures adds vibrancy and texture to the civic landscape. Miami Art Museum embraces its role as a cultural anchor and touchstone in a city that welcomes countless ethnic and age groups, lifestyles and ideas. Miami Art Museumâ€™s far-ranging vision is expressed in the breadth and depth of its exhibition program, and education and public programs. The Museum continues to build its collection of holdings from the twentieth century through the present, as it embarks on a major new building and expansion project. The new Miami Art Museum at Museum Park, designed by Herzog & de Meuron, is scheduled for completion in 2013. For more information about Miami Art Museum, visit miamiartmuseum.org.