Just The Funny Theatre will be hosting a stand-up comedy show on July 23, 2010 at 9 p.m. entitled, “A Night Out With Your Ex” (a Nanerbot Production) featuring the best and brightest of the Miami comedy scene. It will be a compilation of comedians from different backgrounds and styles, many of which are from reputable theatres and comedy clubs including The Second City in Chicago and The Miami, Hollywood and Ft. Lauderdale Improvs. 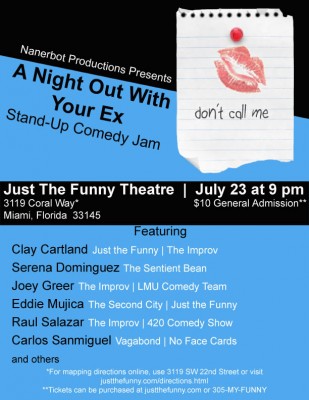