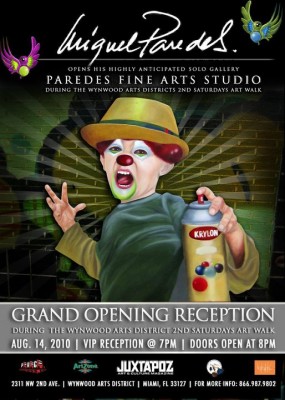 After-party at Florida Room inside South Beachâ€™s Delano hotel
Begins at 11 p.m.
Guests must RSVP to LoveCat at lovecatllc@gmail.com

Celebrated local pop and multi-media artist, sculptor and urban impressionist, Miguel Paredes, will continue making his mark in the Wynwood Arts District with the opening of his first solo gallery Paredes Fine Arts Studio on Saturday, August 14, 2010 during the bourgeoning neighborhoodâ€™s monthly â€œ2nd Saturdays Art Walk.â€ Paredes is scheduled to be present on opening night and be part of the galleryâ€™s cocktail reception at 8 p.m. â€“ open to the public! Guests should confirm their attendance by emailing: RSVP@miguelparedes.com

This marks Paredesâ€™ third stop on his ongoing art tour leading up to Art Basel Miami Beach at the end of this year. The artist has shows scheduled in Seoul, KR; Los Angeles, CA; Boston, MA and New York, NY throughout the next few months. All guests are also invited to attend Paredesâ€™ official after-party at Florida Room located inside South Beachâ€™s Delano hotel. After-party event begins at 11 p.m. and guests must RSVP to LoveCat at lovecatllc@gmail.com 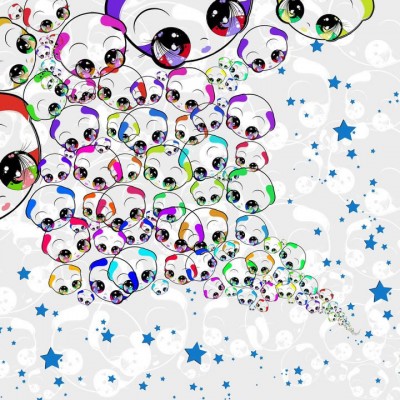 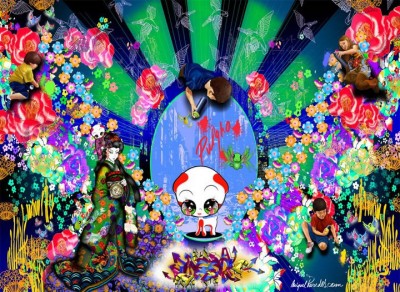 With Los NiÃ±os Paredes has taken what he calls â€œthe best masterpieces I have ever created in my life,â€ his children, and made them the subjects for his revealing drama about the timeless hopes of all parents and the resolutions needed to face the unknown battles of the future. The entire experience of these paintings is shockingly honest, risky and flies in the face of three decades of neo-Pop and post-modern ideas that no image is truer or deeper than the next. Paredes will unveil new works entitled â€œGuadalupe,â€ â€œHappy Buddha,â€ â€œClowning 2â€ and a new 3D piece named â€œTagger.â€

In his Boroughs cycle of paintings, Paredes provides the viewer with the four compass points of his childhood: Brooklyn, Manhattan, Queens and the Bronx. With white line work on the blackened surfaces, hints of colors glowing like bright neon lights, the paintings register as semi-familiar images, inverted in places, but clearly conveying the darkness of a humid city night.

Paredesâ€™ Pop Collages paintings are neither illusions of psychological insight nor about the first impressions so many abstract constructions rely on. Instead, the artistâ€™s roots in urban graffiti give him a special facility with collage work. He uses an overlapping technique as another way to express his belief that things are much more beautiful and energetic than we think.

Paredesâ€™ latest series Digital Art showcases his most recent invention, Pulgha, and its colorful world of Birds, Geishas and puckish, child-like tricksters. Paredesâ€™ admiration of Japanese anime is apparent in this collection, however, the artistâ€™s imaginative hands re-create this specific language and re-enchant the original concerns â€“ all through his Latin and urban sense of digital mysticism and narration. Pulgha means flea in Spanish, but there is nothing small or itchy about this rebellious character. Instead, Pulgha and Co. are creative emissaries, seeding innovation, luring younger generations of anonymous house-bound gamers and online exiles out into a public world of human interaction and community. Paredes donated one of his latest pieces â€œPulgha Worldâ€ and created a mural in the Wynwood Arts District near his new gallery.