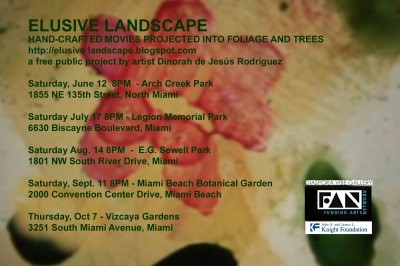 “Elusive Landscape” will be presented at five public parks in Miami from June to October 2010. This work consists of multiple hand-crafted 16mm films depicting the forms and colors of natural landscapes projected directly into the landscapes themselves. These events will be free and open to the public.

“Elusive Landscape” promotes environmental awareness by celebrating Miami’s lush urban greenspaces and natural eco-systems. It connects the cityâ€™s diverse audiences and neighborhoods by engaging everyday people with an experience that is sensorial, magical, celebratory and rooted in nature, and by presenting similar events across the city so that it becomes a shared, unifying experience.

Artist Dinorah de JesÃºs Rodriguez brings to this project over 30 yearsâ€™ experience in hand-crafted 16mm filmmaking, as well as a history of moving image installation, including several works which have included projections in the outdoors. Her work is exhibited internationally in film festivals, museums, galleries, independent venues and public spaces, and she has received numerous grants, fellowships and residency awards for her work.

http://elusivelandscape.blogspot.com
Presented by Diaspora Vibe Cultural Arts Incubator.
In case of rain, this event will be rescheduled to the following Saturday, July 24.