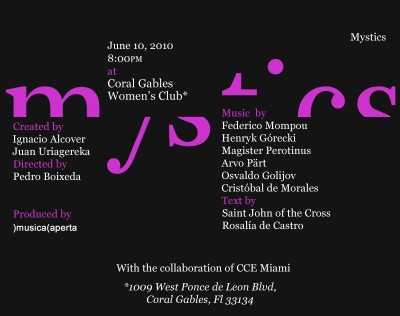 MUSICA APERTA
Musica Aperta â€“ Latin for â€œOpen Musicâ€ â€“ is a performance arts ensemble that has delighted audiences in WashingtonDC since 2002. Musica Apertaâ€™s productions entertain and challenge audiences by presenting music along side complementary art forms such as drama, dance, and the visual arts. Musica Apertaâ€™s belief is that music is relevant to all of us and that the barriers to a deeper experience of music â€“ such as the formality and protocol of the concert â€“ can be transcended by the innovation, energy and openness it brings to its performances. Musica Aperta’s activities are funded in part by the DC Commission on the Arts & Humanities, an agency supported in part by the National Endowment for the Arts.