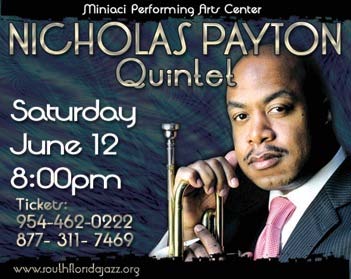 South Florida JAZZ welcomes arguably the most important trumpet player in jazz, Grammy-winner NICHOLAS PAYTON who is making only his third excursion into the area. Mr. Payton performed in 1998 and 2000 for the organization at the Hollywood Jazz Festival.

South Floridaâ€™s premier modern jazz organization is privileged to feature Mr. Payton and his band, as they come off a world tour. Payton is among the most influential artists in the modern jazz genre, and maintains his New Orleans feel and authenticity in the modern idiom. This concert takes place at the 500-seat Rose & Alfred Miniaci Performing Arts Center on the Nova Southeastern University campus, 3100 Ray Ferrero, Jr Blvd in Davie 33314. Tickets are $35 ($25 for South Florida JAZZ members and $10 for students of any age with I.D.) and may be purchased from the Broward Center Box Office by calling 954.462.0222 in Broward County; also toll-free at 877-311-SHOW, as well as online at: southfloridajazz.org, the presenting organizationâ€™s official Web site.

Since 1994, when Nicholas Payton made his recording debut as a leader with From This Moment, the trumpeter has been lauded as a significant, top-tier voice in jazz. Even though he started out as a â€œyoung lion,â€ heralded as one of the new-generation guardians of the hard bop flame, Mr. Payton consistently committed himself to discovering his voice outside of the strict confines of that rearview mirror approach to the music. It was early on that curve that he performed for South Florida JAZZ in 1998 and again in 2001, dazzling the audiences with his pure tone and soul. With his huge, burnished tone and full command of trumpet history from Satchmo through Freddie Hubbard, Mr. Payton has firmly established himself as one of the premier jazz artists of our time.

While his jazz journey has taken him down many roads â€“ from heritage artist to electric experimenter â€“ the 35-year-old trumpeter has arrived at a new plateau of jazz maturity. â€œAs a musician, as an artist, youâ€™re always trying to zero in on the bullâ€™s-eye as a means of becoming a better version of yourself… The approach and the ideas of my music have become more singular, more cohesive. I had no agenda in terms of a specific genre or style, only to be true to who I am now.â€

Born into a musical family and mentored by Ellis Marsalis at the University of New Orleans, Mr. Payton was well prepared to leap into the jazz fray when he emerged on the New York scene in the 1990s. He impressed Wynton Marsalis and was a regular in the early years of programming at Lincoln Center. Payton put his own spin on New Orleans-associated music. Over the next several years, Payton continued to hone his craft working with Hank Jones, Elvin Jones, and Ray Brown, and collected a Grammy with Doc Cheatham. In 2003 he boldly moved beyond the straight-ahead, mildly shocking the jazz world with his adventurous and exhilarating plugged-in band infused with elements of hip-hop, electronica, and effects-driven trumpeting.

This foray was transitory as he struggled with his role as torchbearer for the mainstream, fairly predictable, and somewhat stale jazz, while striving to carry on the experimentations of Miles Davis, John Coltrane, Weather Report; even incorporating elements of R&B and soul. Mr. Payton says he is, â€œmost solidly in a place where Iâ€™m coming to terms with who I am. Iâ€™ve weeded out those things that donâ€™t feel right for me. Iâ€™m not out to try to impress and Iâ€™m not worried that what I play is going to upset some people. I want to write and play music that speaks for me and means something to me, that I feel passionate about.â€ He has found peace.

Grooves are central to his newest project. Mr. Payton states, â€œI want that dance element that was there at the roots of jazz. I feel a lot of jazz has gotten away from that legacy.â€ It is not a common sentiment, but not an invalid one, either.