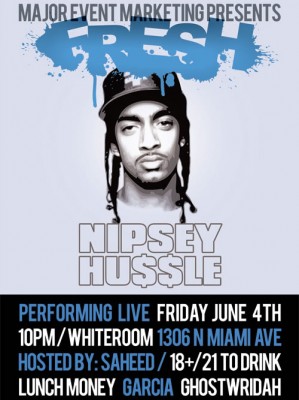 Miami’s ‘Underground King’ Garcia is back for the free release of his third album Shattered Dreams, an album that purposely takes Garcia back to his Miami hip-hop roots of beats and rhymes. After the critical acclaim of his 2008 sophomore album Life Unscripted (which was executive produced by N.O.R.E. and DJ EFN and featured guest production by Midi Mafia, Reef, Diaz Brothers, DJ Honda, Omega One, Dani Kartel, Scram Jones, and more), Garcia and longtime producer-friend Mr. Fury went back to the lab and decided to record an album that was strictly ‘in the moment’ – free from thinking about radio, trends, blogs, etc. Consider Shattered Dreams a therapy session that we can all relate to.

Shattered Dreams – Executive Produced by DJ EFN and produced by Nick Fury HD with additional production by Hazardis Soundz (CNN, Triple C), Big Drain (CNN) and featuring Bern Biz (of Â¡MAYDAY!) and Garcia’s cousin (which both of them make the group The Dysfunct) Adrianne (Of The Rescues).
www.crazyhood.com