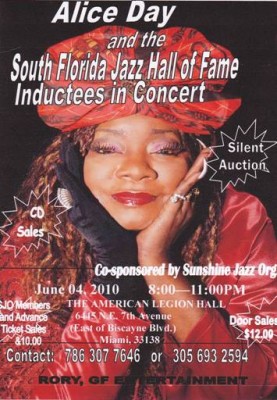 SOUTH FLORIDA JAZZ HALL OF FAME INDUCTION & CONCERT â€“ JUNE 4 â€“ 8PM
The Sunshine Jazz Organization of South Florida and Alice Day are poised for the second installment of â€œSouth Florida Jazz Hall of Fameâ€. (SFJHOF) This special ceremony of inductees was established to take advantage of the opportunity to pay tribute to some of South Floridaâ€™s legends, present and past. We honor those who made an impact in the world of Jazz at home and at large.

On Monday, October 19, 2009, The South Florida Jazz Hall of Fame inducted its first five members.
A special induction for Alice Day, founder and chairperson of the SFJHOF, was made by Sandrell Rivers and Thelma Valles, bringing the total number of inductees to six. The 2009 inductees were:

This June 4, 2010, a special ceremony will be held to officially install these six individuals into the SFJHOF. Also at this ceremony, four inductees will be announced for 2011, having been chosen by special committee, and two more will be voted in by you, the audience, on that day.

Alice Day, â€œSouth Floridaâ€™s First Lady of Jazzâ€ will perform in concert along with other inductees and honored guests. Be on hand to rub shoulders with South Floridaâ€™s newest Hall of Famers, and other performing artists. This is one event you donâ€™t want to miss. Alice Day will be leaving for Europe and the Far East the following day and may not return until May of 2011.

There will be CDs from most of the inductees on sale.
In conjunction with the SFJHOF, on June 4, 2010 The Sunshine Jazz Organization (SJO) will hold a member-ship drive and silent auction.

Come on out and share a laugh, or a smile or a song, or better yet, bring us a hugâ€¦â€¦see some folks you havenâ€™t seen in a long timeâ€¦.and BRING YOUR AX