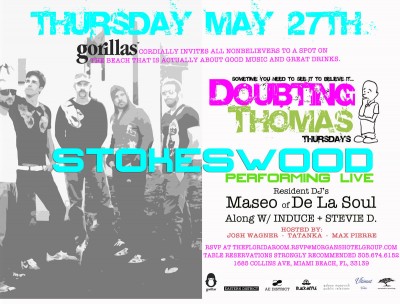 Miami is now home to Atlantaâ€™s hottest electroacoustic band, Stokeswood. The group will push their deeply layered sound into the realm of dance-beat-laden, synthesized rock with live performances every month in the Magic City. The bandâ€™s Miami residency began at The Florida Room at the Delano in March 2010 and will continue each month at many of the cityâ€™s diverse venues. Stokeswoodâ€™s ultra-modern vibe compliments the Miami nightlife experience. This synergy is set to expose the city to a cutting-edge sound and augment its already vibrant live music scene.

About Stokeswood:
Atlanta-based Stokeswoodâ€™s independently released album, Carassia, is like a sonic excursion between the lines of a poetâ€™s story-telling prowess. Thoughtful introspection on the human condition is amplified and challenged by the layered accents of electroacoustic guitars, pianos, synths, strings and drums. The soulful and captivating vocals of Adam Patterson carry each melody flawlessly through the rhythms and musical harmonies of each track. From start to finish, the album sparkles with intelligent musicality and impressive originality that sets Stokeswood apart. The band is currently recording its second studio album slated to debut in Fall 2010.

“Stokeswood is a marvel to watch, as they switch between instruments, giving up their spot on keys, synths and guitar like a game of musical chairs, all the while keeping up an irresistible, danceable backbone to the imaginative melodies and powerhouse, gut-wrenching vocals of Adam Patterson. The band undeniably owns the room with their unique unpredictable sound, expressive beats and high- energy presence. The new songs were infused with confidence in a sound that can only really be called Stokeswoodâ€™s.” – Performer Mag