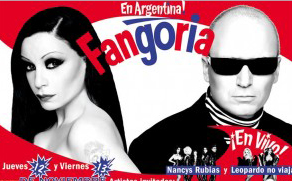 Fangoria And Las Nancys Rubias.
Saturday June 12 / 2010 @ 8pm.
Program to strengthen Cultural Industries
Free Admission. Suggested donation $10
At The Awarehouse
550 Northwest 29th Street, Miami, FL 33127
More info and videos.
FANGORIA This musical duo is formed by two iconic figures of Spanish pop culture: Nacho Canut and Alaska. Both part of the iconoclastic cultural phenomenon of â€œLa movida madrileÃ±aâ€ they are now one of the most known disco bands in the Spanish panorama. Alaska has already been entertaining three generations of Spaniards who have followed her from childrenâ€™s TV shows to musical performances with several bands and her appearances in Pedro Almodovarâ€™s films. In Miami Fangoria will present its new album â€œAbsolutamenteâ€. They will be accompanied by another Spanish rock band: LAS NANCYS RUBIAS.