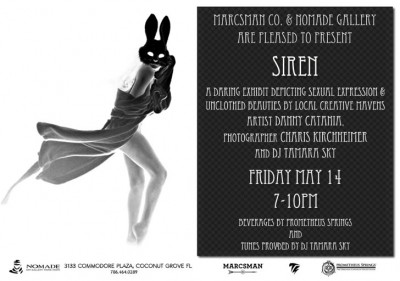 SIREN: A DARING EXHIBIT OF SEXUAL EXPRESSION AND UNCLOTHED BEAUTIES

SIREN is a daring exhibit that depicts sexual expression and unclothed beauties from watercolor, ink and photograph perspectives. Charis will showcase two series, â€œZoophiliaâ€, a daring black and white photographic collaboration with DJ Tamara Sky that captures an ethereal bunny-being sauntering in a ghostly dimension, and â€œTransienceâ€, an engrossing pair of long exposure self-portrait photographs. Danny will add to his nude watercolor collection India ink pieces from his latest body of work, female figure studies that marry Greco-maritime aesthetic with raw feminine spirit.

The Nomade Gallery kicked off Coconut Groveâ€™s Art Walk the first Saturday of the month, May 12010, with an unprecedented event of two live nude photo-shoots, the first inspired by the early 20th century sculpture masterpiece “Le Penseur” by artist Auguste Rodin, and the second a commemoration of the 1972 international â€œchess match of the centuryâ€ recreated by the male and female models, an art affair that prompted The Miami New Times to dub Nomadeâ€™s May 1 show the â€œâ€¦highlight of [Coconut Groveâ€™s] art walkâ€¦â€.

Danny Catania is Nomadeâ€™s May â€œFeature Artistâ€. Danny is a native Floridian with a unique style easily recognized for its sensuality and modernity. His female figure studies have earned him a permanent home in the French restaurant Les Halles made famous by globetrotting chef Anthony Bourdain, and has been exhibited in local art shows and restaurants, as well as in private collections abroad. Miamiâ€™s finest professionals and cultured socialites gravitate towards Dannyâ€™s work, which celebrates the rejuvenation of art and beauty.

Charis Kirchheimer is a Miami based photographer who began her career in early 2007. She has mastered the craft of enchanting and engrossing in the same frame, while continually shaping new standards of photography. In addition to being an acute cityscape photographer, Charis excels at taking an individual and transforming them into an imposing character. Over Art Basel Miami Beach 2009, her â€œZoophiliaâ€ series had an exclusive show at the Shore Club and was a feature artist in Miami’s Independent Thinkers multimedia art festival for her long-exposure series “Transience”, both of which will showcase during SIREN. Charis has also been featured and shot for Ocean Drive Magazine, 944 Magazine, The Miami New Times, Architectural Digest, Italian blog Camera Obscura and Missbehave Magazine.