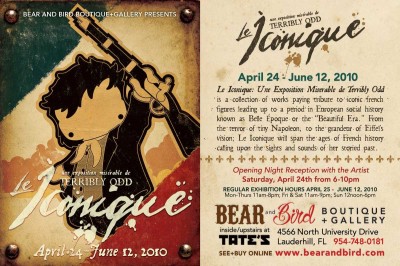 Le Iconique: Une Exposition Miserable de Terribly Odd is a collection of works paying tribute to iconic french figures leading up to a period in European social history known as Belle Ã‰poque or the “Beautiful Era.” From the terror of tiny Napoleon, to the grandeur of Eiffel’s vision; Le Iconique will span the ages of French history calling upon the sights and sounds of her storied past.
Check out his website and facebook page for more info on this artist!
Opening Reception: Saturday, April 24 from 6-10pm
Artist will be in attendance during the opening.
Art will be available for online viewing and purchasing.
Regular Exhibition Hours APRIL 25 – JUNE 12, 2010
Mon-Thurs 11am-8pm; Fri & Sat 11am-9pm; Sun 12noon-6pm
So who is this “Terribly Odd?” Is it a figment of the imagination, a persona, or perhaps that ounce of morbidness that lurks within us?
Terribly Odd, better known as Mike, was born and raised in Miami and spent the majority of his adolescence attempting to evade the excitement of delinquency. In doing so, he experienced the pop culture society that blankets our country and now the world. Intrigued by the many atypical chances popular culture had to offer, in Odd’s late teens, he ventured on to Savannah for a brief stint at the Savannah College of Art and Design. There, Odd soon realized that he would rather produce “miserable” works and kissed-off the thought of ever creating “fine” art.
Art to Odd is a reaction, a language, and his work ranges from the surreal to the decaying scenes of sheer horror spanning film, music, and the unconventional beauty of pop culture; always looking to tread the line between innocence and indecency.
Odd’s work speaks for itself, Odd went from just “someone” who grew up with sketchbooks full of little bastard creations, to “Terribly Odd,” now having a loyal audience to share his vision with. Since then it has been a mad rush of sketches, paintings, and digital works and the ability to share his work through a variety of mediums, being a part of a number of shows as well as solo exhibitions. Definitely coming a long way, Odd’s attempt to take over the world is still in progress.. There is a lot more in store for the “Odd World.”