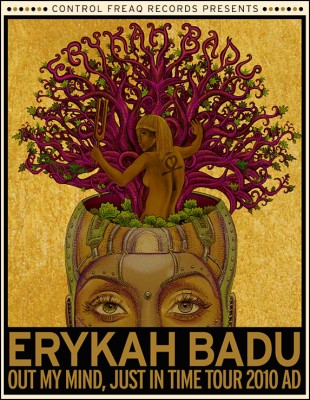 Erykah Badu has confirmed dates for her 2010 North American tour, Out My Mind, Just In Time.
Buy Tickets Now.
The tour takes its name from the closing track on the multiple Grammy Award-winning singer, songwriter, producer, director, and actorâ€™s new album, NEW AMERYKAH PART TWO: RETURN OF THE ANKH which debuted at No. 2 on Billboardâ€™s Digital Albums chart and No. 4 on the Top 200 chart

The â€œOut My Mind, Just In Timeâ€ tour begins on May 22 in Baltimore

The tour will feature a revolving cast of opening acts that vary by city, including
N.E.R.D., Bilal, Janelle Monae, and drummer Ahmir â€œ?uestloveâ€ Thompson from The Roots

By New Amerykah Part Two: Return of the Ankh now at Amazon