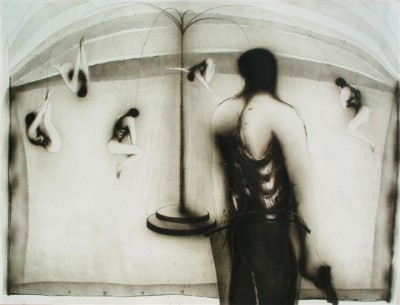 Humberto Castro belongs to the 1980’s generation of Cuban artists. Born in Cuba in 1957, he has lived in exile in Paris (for ten years) and in Miami and New York since 1989. His existential language is based on the use of the stylized human figure; the treatment and context of which transmits an array of messages ranging from the political denunciation to the purely poetic.
Humberto Castro “Draw-Wings: A Retrospective 1990-2010” presents a vision of Castro’s work, which includes a selection of drawings done in Paris, and various large format more recent pieces done in Miami. Painted in a monochromatic mode with shades of whites, grays, and blacks, his compositions display an innate elegance, making them palatable and even lyrical at times. Humberto Castro is a master at capturing metamorphosis: his svelte figures seem to endlessly evolve from ethereal beings to earthlings. This thematic fusion imbues the work with an alluring, visionary quality.
During the last two decades, Humberto Castro held triumphant solo exhibitions in Spain, France, Germany, Italy, England, Poland, Check Republic, Brazil, Argentina, Venezuela, Mexico, USA and Canada.
Cremata Gallery
1646 SW 8th Street
Miami, FL 33135
P: 305.644.3315
www.crematagallery.com