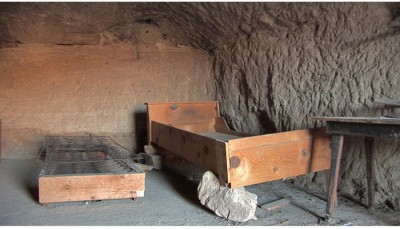 The stark, wailing tones of the artistâ€™s voice punctuate a desolate landscape in Christy Gastâ€™s video installation Batty Cave. Folklore, conjecture and a Dust Bowl aesthetic evoke a narrative of tenderness and desperation in a series of gestures and images that come together like a flipbook to tell us a story of ecological doom, escapism and partnership. Filmed on a desert mountain where two men, expecting a flood of Biblical proportions, built a dusty ark, the artistâ€™s hands form pictograms with scraps of rusty metal, broken glass and chipped rock on an even more humble stage. Creating a densely layered tableau of imagery and sound, a narrative is teased out of the monuments to folly left in the barren landscape. Pulling influence from the history of sound art, photography, and film, Batty Cave will be presented as the corner stone for Christy Gastâ€™s first solo exhibition at Gallery Diet.

Ms. Gast graduated with an MFA from Columbia University in 2004. She lives and works in Miami, Florida and has exhibited previously at The Bass Museum of Art, Artists Space, Exit Art, and the PS1 Contemporary Art Center. Her performative work was included in RoseLee Goldberg’s Performa 07 and she has presented several projects at Andrea Zittel’s High Desert Test Sites. Ms. Gastâ€™s work has been written about in publications such as ArtUS, The New York Times and rhizome.org. Christy Gast will be exhibiting in the Project Space of the de la Cruz Collection during Art Basel Miami Beach 2010.

Batty Cave will be the 13th invitational exhibition at Gallery Diet. Gallery Diet represents five emerging and mid-career artists including Brian Burkhardt, Charley Friedman, Richard HÃ¶glund, Abby Manock, and Daniel Milewski. Exhibitions from the gallery have and are scheduled to travel to institutions such as The University of Wyoming Art Museum (Brian Burkhardt â€™09), the Benton Museum at the University of Connecticut (Abby Manock, â€™10 forthcoming), and MARTE in El Salvador (Abby Manock, â€™10 forthcoming).