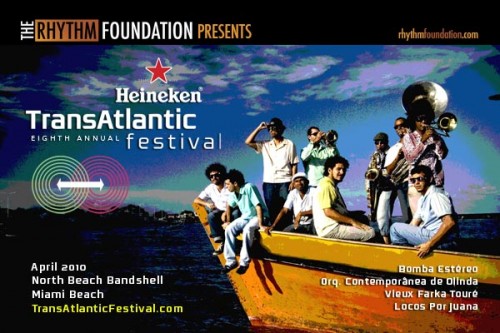 The 8th annual Heineken TransAtlantic Festival is the sound of the world â€œright nowâ€ – the series of concerts and parties featuring modern world music proudly features innovative artists working in the beautiful collision between traditional rhythms and electronica/DJ culture. The series pays tribute to Miami as a true modern â€œTransAtlanticâ€ capital, a crossroads of the Americas and Europe. Itâ€™s the hotbed of a young, club-crazy art scene, playground of the East, perched provocatively on the Atlantic Rim, where centuries of commerce and migration have formed a crossroads that unites Africa, Western Europe, the Caribbean, and the Americas.

The Rhythm Foundation, leading presenter of world music in South Florida, created the series in 2003 knowing that in Miami, there is a large audience of internationally-minded people who want to hear what is happening right now in our world. With this festival, The Rhythm Foundation showcases the cityâ€™s position as the hip center of a whole new generation of global music.

About Bomba EstÃ©reo
Bomba EstÃ©reo formed in the rich underground electronic scene of Bogota, Colombia in 2005. Guitarist Simon Mejia recruited fierce singer Liliana Saumet to join the group, and Bomba EstÃ©reo expanded its â€œpsychedelic cumbiaâ€ sound and captivating live show. The group plays an explosive dance-fusion of electronic dub and hip-hop, in a similar vein as M.I.A. and Santigold, mixed with classic Colombian rhythms like cumbia and champeta. The group made their US debut at SXSW in 2009 and garnered huge attention at LAMC in New York last summer. Myspace.com/BombaEstereo

About Vieux Farka TourÃ©
The son of the revered Malian guitarist Ali Farka TourÃ©, Vieux has stepped out from his late fatherâ€™s massive shadow. Ali Farka TourÃ© proved, in case anyone ever doubted it, that the soul of the blues could be found in West Africa. Vieux is turning heads with a more radical idea: that those western Saharan roots can be heard in everything from the jam band scene to Jamaican dub. The young Six Degrees Record artist and his band have caused a sensation at music festivals across the globe in recent years. He makes his Florida debut with this concert. VieuxFarkaToure.com

About Orquestra ContemporÃ¢nea de Olinda
OCO brings together some of the best young musicians of Pernambuco, birthplace of classic Northeast Brazilian rhythms forro and frevo. The late legendary musical genius Chico Science left behind a supercharged music scene that fuses the rhythms of Pernambuco with drum & bass, rock and world grooves. In this music-crazed city filled with amazing horn players and percussionists comes Orquestra Contemporanea de Olinda, who has built a concise identity and huge following since their 2008 debut. Distributred by Som Livre, Brazilâ€™s largest label, their CD was nominated for a 2009 Latin Grammy and was hailed by the New York Times. Now they embark on their US debut tour, including New York Cityâ€™s Lincoln Center and Kennedy Center in Washington, D.C. Myspace.com/OrquestraContemporaneaDeOlinda

About Locos Por Juana
The two-time Grammy-nominated Miami-based band received this write up in the LA Times: â€œBlending relaxed reggae grooves with biting social commentary, hip-hop raps with brassy solos, Locos Por Juana pulls listeners into a reverse Gulf Stream churning through the Straits of Florida south to Jamaica, Venezuela and Colombia, and over to Puerto Rico, Locos Por Juana shows with every song that it has thoroughly assimilated its multiple musical fathers, with a Caribbean lilt and a rock-steady beat.â€
Myspace.com/LocosPorJuana

About The Rhythm Foundation
The Rhythm Foundation, a Miami-based non-profit cultural organization, is the foremost presenter of world music in South Florida. It was founded in 1988 with the goal of increasing international awareness through live music. The Rhythm Foundation has presented more than 400 concerts, events and festivals by established and innovative artists from around the world. Special focus is given to those cultures connecting to South Florida audiences â€“ music from Brazil, Latin America, Africa, the Caribbean, Asia and Europe. Many of the worldâ€™s established music legends have made their US and/or Florida debuts with The Rhythm Foundation. Considered to be one of the top world music presenters in North America, the organization has built strong name recognition and a dedicated audience over the last 22 years. Success is due to the selection of premiere artists and consistent quality of production. The Rhythm Foundation receives annual support from its loyal members, the Miami-Dade Department of Cultural Affairs, Miami Beach Cultural Arts Council, Atlantic Broadband and Latitude International Business Centers. Visit RhythmFoundation.com