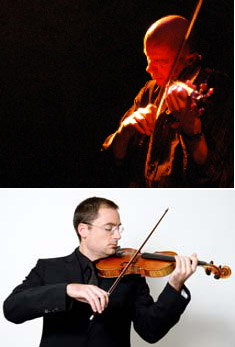 Jazz & Bach A dialogue between the violinist and the violist, in a program featuring Jazz & Bach.

CLAUDE HALTER, Violinist
Originally from Paris, France, violinist Claude Halter moved to the United States in 2001 and since has been heard playing nation wide as a soloist, chamber musician, and orchestral leader. At the age of 8 Claude began his musical education at the Maitrise de Paris where he was a member of the acclaimed boyâ€™s choir. He moved to the United States when he was 19 to pursue a Bachelorâ€™s degree at Lawrence University and a Masterâ€™s degree at the San Francisco Conservatory where he studied with Stephane Tran Nâ€™Goc and Ian Swensen respectively. While at Lawrence University, Claude had the privilege of performing a solo with the Lawrence University Orchestra as well as a nationally broadcast performance as a winner of the N.P.R. Neale Silva Young Artists Music Competition. As an avid chamber musician, Claude has performed alongside artists such as Menahem Pressler (Beaux-Arts Trio), Robert Mann (Juilliard String Quartet), faculty members of the San Francisco Conservatory, and members of the San Francisco Symphony, Ballet, and Opera. In addition, Claude is a member of the Meridian String Quartet that presents a concert series every summer in Colorado. He is equally passionate about the orchestral repertoire and has led many performances as concertmaster under great conductors such as Micheal Tilson Thomas, Osmo Vaanska, and Bruce Lamott. Claude currently resides in Miami Beach where he performs with the New World Symphony.