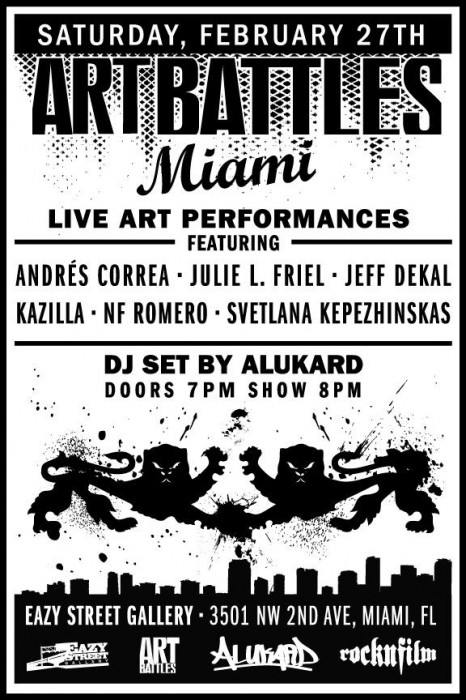 The Art Battles 2010 Tour Kicks off in Miami, Florida!
Art Battles is a live-art competition where artists create work side- by-side in front of a live audience. For nine consecutive years and over 100 live shows Art Battles has been a platform for talented artists to showcase their skills in and around NYC in a most unique setting and under tremendous pressure to perform. Miami is the first stop of its national tour that includes major cities like Los Angeles, Seattle, San Francisco, Chicago, New Orleans, Philadelphia, and Charlotte.
Eazy Street Gallery is proud to host the first stop of the national live-art performance tour of Art Battles in 2010. Featured artists will have installations of their most recent work for two-weeks after the show opens on February 27, 2010.
The following artists will be competing:
JEFF DEKAL
SVETLANA KEPEZHINSKAS
NF ROMERO
KAZILLA
JULIE L. FRIEL
ANDRES CORREA
WHEN: Saturday, February 27, 2010 8:00 PM
WHERE: EAZY STREET GALLERY
3501 NW 2nd Av
Miami, FL 33127
MUSIC : DJ Set by Miamiâ€™s own ALUKARD . Listen to their new album release â€œONE SHOTâ€.
Portfolio Links:
Jeff Dekal
Nick Romero
Julie Friel
KAZILLA
Svetlana Kepezshinskas
Andres Correa
ArtBattles