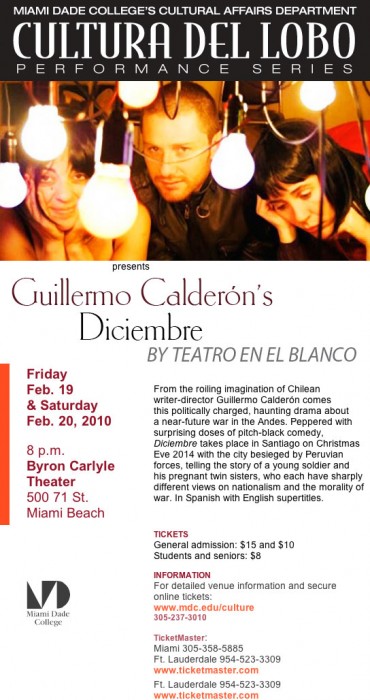 Guillermo CalderÃ³nâ€™s Diciembre
Teatro en el blanco
Friday and Saturday, February 19 – 20, 2010.
8 p.m.
Byron Carlyle Theater
500 71st St., Miami Beach
Tickets for Performance
on Friday, February 19
From the roiling imagination of Chilean writer-director Guillermo CalderÃ³n comes this politically charged, haunting drama about a near-future war in the Andes. Peppered with surprising doses of pitch-black comedy, Diciembre takes place in Santiago on Christmas Eve 2014 with the city besieged by Peruvian forces. Young soldier Jorge returns home on a 24-hour leave to celebrate the holiday with his pregnant twin sisters, who each have sharply different views on nationalism and the morality of war. One wants Jorge to defect, the other demands he return to the fight. Jorge, however, has his own take on the matter. Smartly produced by his dynamic Santiago-based company Teatro en el Blanco (â€œTheater on Targetâ€), CalderÃ³nâ€™s play strips away ostentatious theatrical conceit for us to hear clearly the terror knocking at the door. Featuring Paula ZÃºÃ±iga, Trinidad GonzÃ¡lez and Jorge Becker. Performed in Spanish with English supertitles.