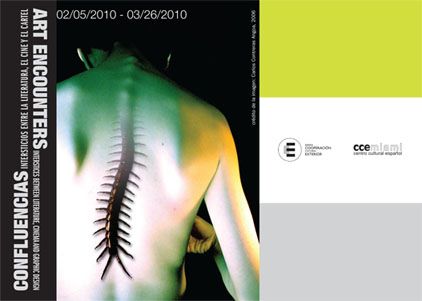 ART ENCOUNTERS: INTERSTICES BETWEEN LITERATURE, CINEMA AND GRAPHIC DESIGN
START DATE: 02-05-2010
END DATE: 03-26-2010
HORARIO: 8pm
Program to promote Ibero-American Cultural Industries
Friday February 5 @ 8pm
Curator: Janet Batet
On view until March 26 /2010
At CCEMiami. Free Admission
More Info
ART ENCOUNTERS INTERSTICES BETWEEN LITERATURE, FILM AND GRAPHIC DESIGN stands on a sort of ritournelle where diverse creators visit and revisit a unique topic, becoming the show a tribute and a rereading of human ontological problematic questions.
The exhibition -which is part of the project GrÃ¡fica Latinoamericana 20/21- relies on masterpieces of the literature and cinema, now interpreted by the graphic design. The selected posters highlight by their conceptual rigor and the interplay with the clever metaphor and the ellipsis that incite the viewer to rebuild here and there, transforming the perceptive process into a ludic and vivid experience.
At the same time, the show pays tribute to the Latin American graphic design tradition, including a selection of artworks made by iconic artists which contributions are milestones of the poster history in the region.