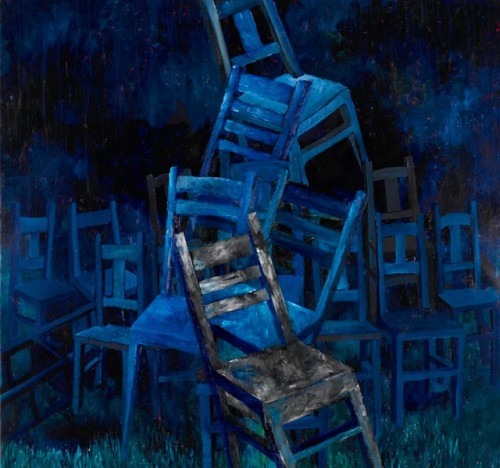 Cremata Gallery is pleased to present the solo exhibition of Cuban painter Hernan Garcia this Friday, February 5th, 2010 from 7:00 to 10:00 p.m. De Kooning said, ” There is a moment in life when on takes a walk in his or her own landscapes and scenes”, when one plays his or her own games without fear, with great honesty, with great certainty.
Before establishing himself between Madrid, Spain and Miami, Hernan Garcia resided for many years in San Juan, Puerto Rico, where he created hundreds of his phenomenal pieces, earning the respect of the critics and of the lovers of the visual arts. In 1990 he received the most important prize of the San Juan XI Biennial of Latin American and Caribbean Engraving – one of the most prestigious biennials of the world on engraving – with an impacting and beautiful monotype in which, intelligently and with great force, he combined the defining elements of his work.
Later there was a moment in which Hernan decided to make of the â€œchairâ€ – that aesthetic object with so many artistic possibilities – the protagonist of his work: It was a tribute to those friends that allow us to rest, to think, to write, to dream and, of course, to draw and to paint. He created with the chair “landscapes” in which they could be seen as fascinating beings with fascinating stories. Sometimes they seemed actors in a range of different scenarios, whether “living” their tragedies or their comedies, but always revealing the brutal emptiness or loneliness that we are all called to live from time to time.
Hernan Garcia belongs to the artistic generation that followed the other of the Cuban artists that defined Modernism in Cuba: Ponce, Lam, Victor Manuel, Portocarrero, Amelia Pelaez, CarreÃ±o, Cundo Bermudez, Lopez Dirube, to mention only a few. He now returns as one of the most consequent voices of the Cuban “plastica” (after a necessary rest imposed by what Cesar Vallejo called ” the black heraldos”, those strong blows that life delivers to us).
We stand before a real poet of the human condition – in a Shakespearian sense – before someone who understands the human being and does not ever caricaturize it (which a superficial reading of his work might suggest to some), an artist who unveils the essence of being to us. We now stand before someone who has intensely lived – with pain and ecstasy – most of the XX century and some of the XXI.
Manuel Alvarez-Lezama
Art Critic
Cremata Gallery
1646 SW 8th Street
Miami, FL 33135
cremata@crematagallery.com
www.crematagallery.com